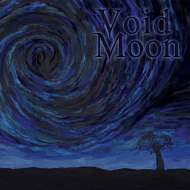 On the Blackest of Nights

Sweden's VOID MOON has nothing to do with Michael Connelly's crime thriller, but they are a moody encapsulation of zodiacal disorder. At their best, VOID MOON conjures a figurative, laboring tempo designed to convey slip-away lunar transience. The void moon itself is a laggard rotation spot which the astrological calendar considers a "lost" period of time and it reputedly has suspect ramifications over the human psyche. All assuming you buy into the concept.

For their purposes, VOID MOON embraces Goth and doom measures, sometimes to quixotic effect but unfortunately, they trip over themselves at times and plummet into the sloppier end of their still-developing craft. CIRITH UNGOL and CANDLEMASS hold subtle influences over VOID MOON, yet the latter hasn't quite grasped the former's mastery of the arcane. They seem to be on their way, given the lavish guitar intro to "The Word and the Abyss" from Erika Wallberg and the chuffing bars exiting the same track. Then there's the forlorn six string duet from Wallberg and Jonas Gustavsson greeting the subsequent instrumental, "Psychic Bleeding". VOID MOON really gets their doom-driving act together on the grimacing, spit-driven "Cyclops".

These tunes are the most comprehensive on VOID MOON's debut album "On the Blackest of Nights", one that could've used longer baking time for the rest of the duration. Reportedly culminated from a re-recording of old demo tracks plus a handful of new tunes, "On the Blackest of Nights" bookends a handful of sharp songs with others bearing good ideas yet need much more development.

"Hammer of Eden" has the right intent, but it gets trapped in its own wallowing and fails to engineer a true identity. It stumbles instead of shambles and hardly seems akin to the nearly-sublime "Among the Dying" later in the album. Ditto for the title track (despite a gorgeous bridge yielding a swirling twin guitar attack) and the messy closing numbers "Through the Gateway" and "The Mourning Son". Tempo issues stymie VOID MOON on these tracks with handfuls of bass pedal flubs and backbeats so far behind the main drive they hardly contribute to the bare minimalism of the songwriting. "Though the Gateway" especially should've been held by a proverbial sentry and denied passage until it was scrubbed clean.

Minimalism is the main focus to VOID MOON's scheme and it works in the center portion of the album. The corner tracks of "On the Blackest of Nights" nearly derail the integrity VOID MOON momentarily establishes. While much of their music is carried overtop the unhurried bass lines of Peter Svensson, the album nearly becomes an exercise in futility. The band's biggest strength is the emotive, grizzled vocals of Jonas Gustavsson. At times he treads into James Hetfield territory and there are a few spots where he needs some touching up. For the most part, he's personable and VOID MOON would suffer worse without him.

"On the Blackest of Nights" is both inspired and victimized by VOID MOON's indicative sulkiness and ambivalence. Asset becomes foible, however, and VOID MOON should have opted for an EP only of the middle tracks then taken much more time with the remainder of the material. The winter solstice is drawing near, so herewith lies an opportunity for VOID MOON to plug in and hopefully dig deeper.