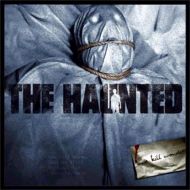 "The only pressure we feel comes from within ourselves," is the standard musician's answer to an equally cliché question. In a rare moment of sincerity, THE HAUNTED guitarist Patrik Jensen has admitted that the pressure of following up 1999's "The Haunted Made Me Do It" has at times been overwhelming. That's understandable, not to mention human, since the public's focus on traditional aggressive metal (or thrash, if you will) is increasing by the day, and the Swedes have positioned themselves as one of the genre's leaders. Whether or not they can stay ahead of the pack remains to be seen. The all-so-important third album does indeed raise as many questions as it answers.

Going into writing mode, the main goal was to adopt a more fierce approach than on the predecessor. Thus THE HAUNTED have tuned down a notch, providing the guitars with a thick and crunchy bite they've lacked in the past. The return to Studio Fredman, where the self-titled debut disc was laid down, has also done wonders for the sound. Production-wise, this is a top-notch release — just listen to Per Möller Jensen's snare drum, it's so darn potent it could give a strung-out junkie an orgasm.

The meaty Marco Aro (formerly of FACE DOWN) has had a hard time filling the shoes of the charismatic Peter Dolving, and although his muscular vocal style is far from personal, it's now more in tune with the band's dark, frenetic stance. Working with a vocal coach has certainly given Aro more stamina and his growls show more confidence.

Patrik Jensen's dearest musical memory is of the time when SLAYER drummer Dave Lombardo, at the time in TESTAMENT, joined the group on stage for a rendition of "Raining Blood". If the intro "Privation Of Faith Inc." seems like a ode to SLAYER, wait until "Godpuppet" kicks in. As great a song it is, it's easy to dismiss it as a SLAYER "Greatest riffs" tribute. Therein lies THE HAUNTED's main problem: the strongest riffs seem uncannily familiar. Whether it's Jensen's obsession with all things King and Hannemann, fellow guitarist Anders Björler's recycling of his former act AT THE GATES (the monstrous "Shadow World" is but one cut that could've been penned around the time of the 1995 classic "Slaughter Of The Soul") or revamping previously used song structures (the standout track "D.O.A." is a reworked version of "Forensick" off their first album) — we've heard it before.

Granted, "One Kill Wonder" has its moments and its sheer power will undoubtedly blow a lot of people away. Whilst THE HAUNTED have never claimed to be original, I for one expected them to broaden their horizons a little and expand on their sound.