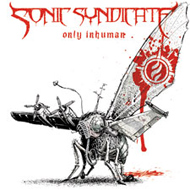 As noted here in a review of SONIC SYNDICATE's "Eden Fire", the story is one of a sextet of Swedish youngsters (teens to early 20s) that released an album on Pivotal Rockordings (the Pivotal Rage webzine folks). Said album is made up of re-recorded songs from a couple of EPs and a few new tracks. The style of "Eden Fire" is one of tried-and-true and well-written Gothenburg melodic death metal that brings to mind bands like SOILWORK, IN FLAMES, and DARK TRANQUILLITY. A similar style is also heard on "Only Inhuman", but with a marked increase in immediacy of tunefulness and substantially improved production values. The band also landed a deal with Nuclear Blast for release of the disc, quite a leap for this bunch.

Big melodies and an even bigger sound mix soon become apparent on "Only Inhuman", and the musical style now has far more to do with SOILWORK and, to some extent, new IN FLAMES, than DARK TRANQUILLITY. You've heard it all before, but there is no denying that SONIC SYNDICATE has written a solid collection of songs. A whole lot of chunkiness defines the music and the album packs a mighty punch because of it. Producer Jonas Kjellgren (SCAR SYMMETRY) has outdone himself and given the band exactly the kind of sound craved by fans of the genre. Of course, alternating growls and clean singing are the order of the day, courtesy of vocalists Richard Sjunnesson and Roland Johansson. Nowadays this kind of songwriting will be eaten up by the Swede-loving masses both stateside and abroad. With the exception of a few slower, some might say mellower, tracks, the formula of bombastic Swedish melodic death metal verses with soaring clean choruses is held to tightly across the disc. The upside is that most of the tracks are damn catchy, making it difficult to bitch about the spit-shine polish of it all.

At times, the album feels a little too bright and shiny for its own good, even contrived, but that's more a matter of taste, than an outright criticism. The fact of the matter is that if you want an album that sounds larger than life on a good stereo and with melody as a primary component, then "Only Inhuman" is your ticket. This is truly a disc for fans of the aforementioned "big" bands. Imitation is in fact the sincerest form of flattery.