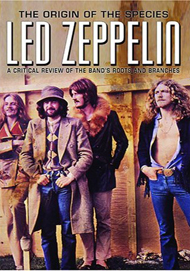 Origin of the Species

You surely know that the roots of LED ZEPPELIN's trailblazing music descended directly from America blues. But how much do you really know about the inspirations and influences of guitarist Jimmy Page, vocalist Robert Plant, bassist John Paul Jones, and drummer John Bonham, specifically the years before the seminal self-titled debut rocked worlds around the globe? I thought so. That's why "The Origin of the Species", a scholarly 70-minute review of the band's "roots and branches" will inform all but the most diehard ZEP fanatic.

Though not authorized by LED ZEPPELIN's members, "The Origin of the Species" is a detailed and intelligent overview of the members' lives up through the first two ZEPPELIN albums. Dispensing with any artificial pomp and circumstance, the documentary would not be out of place as a PBS piece, which speaks more about its knowledgeable cast of commentators and professional appearance than any kind of allusion to stuffiness and boredom. Interspersed among a wealth of rare live footage and photographs are in-depth discussions with the likes of author Alan Clayson, Chris Welch (ex-Melody Maker),Keith Altham (ex-1960s NME editor),Chris Deja (former YARDBIRDS guitarist),and journalists Barney Hoskyns and Pat Sutcliffe. Commentary from musicians that worked with the members, including Dave Berry, Chris Farlowe, and Clem Cattini is also included. The documentary is pieced together in a way that keeps the viewer's attention and leaves one with an entirely new perspective on the sound of LED ZEPPELIN.

The pre-ZEP lives and influences of all four members are detailed here with Page getting the lion's share of the attention, followed by Plant, Bonham, and Jones. Page's early studio session work as a teenager is absolutely fascinating. The guitar legend was bit by the music bug after becoming enamored with Elvis Presley guitarist Scotty Moore and a host of American blues legends. This ultimately led to hours of said session work and his becoming a full-time member of NEIL CHRISTIAN AND THE CRUSADERS as a mere teen. Amazingly enough, Page was "estimated to have played on 60 percent of the hit records that came out of London between 1963 and 1966." The DVD is full of informational nuggets like this one and of course includes a good bit of detail on his formative years as a member of THE YARDBIRDS, THE NEW YARDBIRDS, and finallyLED ZEPPELIN. Without regurgitating the contents of the disc itself, suffice it to say that the pre-ZEP careers of the remaining three members are enlightening as well. Stories of Plant's involvement in several '60s R&B-based and psychedelic groups, such as BAND OF JOY, is especially intriguing.

The central portion of the disc is capped off with a compelling review of individual songs on the first two LED ZEPPELIN albums, several of which were simply re-arranged versions of old blues and folk songs. Extras include "The Story of the Yardbirds" and "The Hardest Led Zeppelin Quiz in the World Ever". Recommended for aspiring rock historians and fans alike.