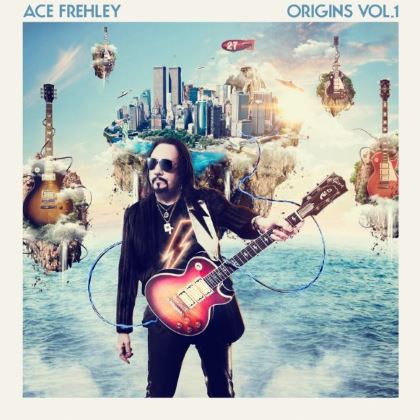 To be frank, covers albums are getting to be so passé it becomes subjective to taste and artist loyalty to avoid thinking of them as contract fillers. However, Ace Frehley's on a roll right now, and we like where he's at, so we'll cut the man some slack. After all, in the past, he's done respectable covers of ELO's "Do Ya", SWEET's "Fox On the Run", the STEVE MILLER BAND's "The Joker" and with KISS, the ROLLING STONES's "2000 Man". He also scored a hit for FREHLEY's COMET with Russ Ballard's "Into the Night".

A recipient of a tribute album himself, "Return of the Comet: A Tribute to Ace Frehley", all revolves 360 degrees in the rock cosmos as Ace drops "Origins Vol. 1" upon his fans. Twelve covers, including three KISS classics, and he does a solid, sometimes tremendous job. Coming to Ace's way-back party is Slash, John 5, Lita Ford, PEARLJAM's Mike McCready and, drum roll over top a banner declaring “The Rumors Are True (to an Extent),” Paul Stanley.

Taking on CREAM's "White Room" faithfully with his own cosmic pull on Eric Clapton's psychedelic theatrics, Ace's fading jam feels, much less sounds, terrific. Ace hits up the STONES again with a decent if moderated "Street Fighting Man" before he and John 5 rip into Jimi Hendrix's "Spanish Castle Magic". The two have a blast together and it's one of the densest numbers on the album. The solos are greasy and free-formed, making zero attempts to emulate the late Hendrix. Instead, Ace bonds with John 5 as readily as he does with Slash on their spectacular take of THIN LIZZY's "Emerald".

The collaboration between Ace and Paul Stanley on FREE's "Fire And Water" is naturally going to be the hot spot of "Origins Vol. 1". Though Stanley emailed his vocals instead of recording them live with Ace, the mix is superb. The illusion of mended fences twirls happily in the minds of fans who bought the trading cards, the dolls and begged their parents to stay up late to see KISS's appearance on "The Midnight Special". Even better, Stanley's singing is as marvelous as Ace's bluesy drawling. Even if nothing further manifests from this spirited tag of "Fire And Water", let it ring to the KISS Army as happily as the 1995 family reunion on "MTV Unplugged".

Ace's reboots of KISS's "Parasite", "Cold Gin"and "Rock And Roll Hell", itself a BACHMAN TURNER OVERDRIVE cover, are going to stand the heaviest scrutiny, which they really shouldn't, since Ace naturally knows them inside and out. John 5 appears again with Ace on the banging "Parasite" and the two torch the thing with nearly as much fire as Gene Simmons's most famous trick outside of tongue waggling. Though Simmons's lascivious growls are indelibly imprinted upon "Cold Gin", how many of you fans out there quietly wished Ace got his lead crack at it on the mike? Call it wish fulfillment, as he nails "Cold Gin" from top to bottom. "Rock And Roll Hell", also fielded by Gene Simmons, is played here slow and hefty; though the "Creatures of the Night" version is superior, Ace's solo version rocks well.

LED ZEPPELIN fans won't have any qualms with Ace's thundering haul of "Bring it On Home". He nails the blues-pocked intro, then rockets off in true Frehley fashion. Ace and Lita Ford keep it on the down low, except for Lita's dialed-high vocals, on a by-the-numbers do-up of THE TROGGS's "Wild Thing". Ditto for Ace's fun, if sedate compared to the original, plow through THE KINKS's "Till The End Of The Day".

All of this KISS to-do behind “Origins Vol. 1" smells inherently of an audition for a reclamation of the Spaceman persona that should never have been Ace's to lose. Given Ace's palpable focus on his last three solo albums, the odds makers would say he's on a path to earning it back. The smoke apparently having settled from KISS's Rock & Roll Hall of Fame fiasco, it would be cathartic to see Ace (and Peter) reunited with Gene and Paul. Not so much for a blown-out tour, even if marketing potential dictates otherwise, but for a healing stone project to make their own amends and to their fans who've weathered the drama all these years. Do the right thing, guys.