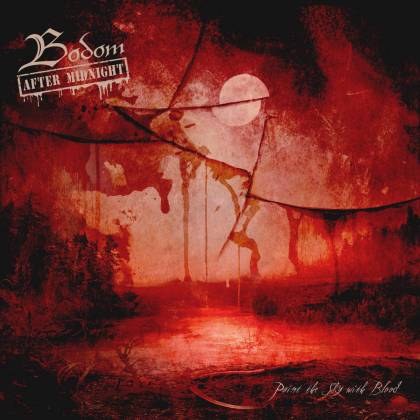 Paint The Sky With Blood

The world of heavy metal was saddened by the untimely death of guitarist Alexi Laiho at the end of 2020. Laiho's death at the age of 41 came as the revered Finnish musician was set to begin a new chapter in his life. His twenty-year tenure as guitarist/vocalist for CHILDREN OF BODOM ended in December 2019 — drummer Jaska Raatikainen, bassist Henkka T. Blacksmith and keyboardist Janne Wirman departed the group — leaving Laiho and rhythm guitarist Daniel Freyberg to forge forward with a new project: BODOM AFTER MIDNIGHT.

Gaining early notoriety on releases such as 1999's "Hatebreeder" and 2000's "Follow the Reaper", CHILDREN OF BODOM, in large part due to Laiho's shredding guitar assault, blended an over-the-top flair for the neoclassical with a rock aura, all the while anthemic choruses gave a pop-metal shine to the band's otherwise buzz-saw death metal approach. As the years went on, the group eventually settled into a solid groove of generating comfort-food releases such as 2008's "Blooddrunk" and 2013's "Halo of Blood", which did a good job of scratching the itches that the group's fans were looking for, if not continuing on a path of innovation or building album-of-the-year level buzz. Given that Raatikainen, Blacksmith and Wirman cited their departure due to differing viewpoints with Laiho, the vaunted guitarist embarked on a new project — albeit due to a legal agreement that the CHILDREN OF BODOM name could not be used without permission from all band members — leaving fans curious on where he would go.

Unfortunately, the sample size of finished songs completed by Laiho and Freyberg, alongside the full lineup that would complete BODOM AFTER MIDNIGHT — drummer Waltteri Väyrynen (PARADISE LOST),bassist Mitja Toivonen (ex-SANTA CRUZ) and live keyboardist Vili Itäpelto — is fairly small, due to Laiho's death, and we only have two finished original songs and a cover of DISSECTION's "Where Dead Angels Lie" to complete the EP, titled "Paint the Sky with Blood". The originals, the title track and "Payback's A Bitch", seem to indicate that Laiho was mostly content to continue treading the same path he had on recent CHILDREN OF BODOM records. Both tracks are incredibly energetic, with Laiho's guitar histrionics once again taking center stage, via thrashy riffs during verses and shredding virtuosity during bridges and solos. But if these two tracks are any indication, BODOM AFTER MIDNIGHT wasn't going to be a victory lap for a recharged musician, nor a radical departure from someone with something to prove to critics. It was simply going to be another piece of candy for the now-older kids who had loyally kept their reserved seats on the CHILDREN OF BODOM bandwagon.

The one moment where it seems that Laiho had it in him to explore darker paths was on the new group's stellar cover of DISSECTION's "Where Dead Angels Lie" from that band's landmark 1995 classic, "Storm of the Light's Bane". Covers were common during Laiho's run with CHILDREN OF BODOM but were typically relegated to pop and hard rock covers that at times came off as trolling diehard metal heads. The cover contained here though is fairly slavish to the original, with BODOM AFTER MIDNIGHT capably capturing the moody darkness and showing signs of exploring more sinister paths in their musicianship, if not their songwriting.

Alexi Laiho was one of extreme metal's true guitar heroes. The few bits and pieces of BODOM AFTER MIDNIGHT contained on "Paint the Sky with Blood" may see him treading down already well-worn paths, but at the very least, they reaffirm his earning of that status.