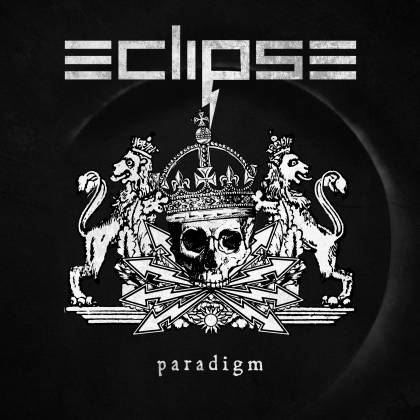 In 1941, New York Yankees outfielder (and future husband of Marilyn Monroe) Joe DiMaggio managed to collect a hit in 56 consecutive games, a record that still stands today. Even more impressive is the fact that there have been 19,690 professional players in the history of Major League Baseball, yet DiMaggio's hit streak was a whopping 11 games longer than anyone else's.

Seventy-eight years later, Erik Mårtensson is on a similar roll. Over the past decade, the Swedish singer/guitarist has been a key part of many of the most celebrated albums in modern melodic rock, including three by W.E.T. (a group fronted by SONS OF APOLLO's Jeff Scott Soto),two by NORDIC UNION (a project with PRETTY MAIDS vocalist Ronnie Atkins) and two by AMMUNITION (a band featuring former WIG WAM singer Åge Sten Nilsen).

That list would be impressive enough as is, but it doesn't even include Mårtensson's primary day job as the front man of ECLIPSE. The group hit their stride in 2012 with the release of their fourth album "Bleed And Scream", and since then, they've hit the mark with DiMaggio-like consistency on 2015's "Armageddonize" and 2017's "Monumentum".

In an interview last year, Mårtensson hinted that ECLIPSE's next album would see the group evolve. "We're going to keep trying to find out what is ECLIPSE — what is our sound? — and wash away even more of the influences we've had since we were kids, and try to come up with something unique and original," he said.

After listening repeatedly and belatedly to the recently released "Paradigm", it's clear that Mårtensson wasn't lying. While the album proves definitively why he's the reigning king of melodic rock, it also breaks, if not outright shatters, the heavy AOR mold.

Some of Mårtensson's previous songs with ECLIPSE — most memorably, 2012's "Battlegrounds" — hinted at the direction that "Paradigm" sees the group embrace with gusto. While still bursting at the seams with massive hooks, the new album finds ECLIPSE showing off more of an Irish/Gary Moore influence than ever before, with lilting melodies that simply have no modern peer. It's present from the very first notes of album opener "Viva La Victoria", which features a noir-tinged riff that sets the table shrewdly.

From there, "Mary Leigh" shows off the trademark gigantic-sounding production and infectious choruses that are Mårtensson's specialty before another haunting Celtic-noir riff opens the midtempo "Blood Wants Blood", a spiritual successor to "Monumentum"'s standout "The Downfall Of Eden". It might seem awkward to praise the beauty of a song lamenting that "in the end, we all must die," but a little sonic sugar goes a long way in helping the medicine go down.

"Shelter Me" sees Mårtensson's further mastering the power of restraint, as he did admirably in the past on the likes of "Live Like I'm Dying" and "Hurt". These are not ballads in the traditional lighter-waving sense, but mournful, plaintive pleas for, in this case, sanctuary "from the demons in my head."

That brings us to "United", the album's first preview track and a song uncharacteristically powered — at least temporarily — by an acoustic guitar. The song's "we are one" sentiment is admittedly nothing new — IRON MAIDEN's "Blood Brothers" was the first point of reference that came to mind for yours truly — but whereas modern MAIDEN songs tend to, shall we say, occasionally overstay their welcomes, ECLIPSE typically delivers their messages in tidy packages of four minutes or less.

One notable exception is "When The Winter Ends", a haunting yet irresistible track that redefines the term power ballad. On previous ECLIPSE albums, you'd expect the song to end around the three-minute mark after its apparent "whoa"-driven finale, but here, Mårtensson gives it an extra 90 seconds to breathe and, in the process, delivers what might be the most goosebump-worthy moments on a rock album this year. (The album's Japanese edition includes an acoustic version of the song as a bonus track; it's still a knockout, but without the outro, it feels like an appetizer in comparison.)

Other standouts include "Delirious", which sounds like ECLIPSE giving W.E.T. 's "Dangerous" an added dose of piss and vinegar and provides Mårtensson's right-hand man Magnus Henriksson a chance to show off his dazzling lead guitar work; the sneering and doomy "The Masquerade", which sees the band further explore a direction first introduced on 2017's "Black Rain"; and "Take Me Home", which delivers one final blast of Celtic-inspired bliss and sees ECLIPSE rival fellow Swedes HARDCORE SUPERSTAR's 2018 song "Goodbye" for the most fitting live-set closer in recent memory.

It might take 57 games, but eventually, even legendary Hall Of Famers fail to connect. When they're in the zone (or as Hannibal Smith would say, on the jazz),though, it's electric to watch them in action. Perhaps Mårtensson's next album will see him stumble — or at least find him hitting a modest single as opposed to knocking it out of the park, as he does once again on "Paradigm" — but for now, his impressive streak continues.