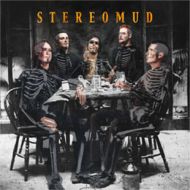 Consisting of former LIFE OF AGONY guitarist Joey Z and drummer Dan Richardson, ex-STUCK MOJO bassist Corey Lowery (brother of SEVENDUST's Clint Lowery),ex-BELT FED vocalist Erik Sebren (aka Erik Rogers),and ex-WARDANCE guitarist John Fattoruso, STEREOMUD is an unsurprisingly musically accomplished group who perform a fairly unique brand of guitar-charged, melodic rock that, for the most part, serves as a breath of fresh air in an era of dime-a-dozen, virtually interchangeable pimprock outfits. Although rooted around the same kind of riff-heavy approach that popularized LIFE OF AGONY during the band's early days, STEREOMUD is an arguably modern sounding entity, with a style that is as forceful as it is melodic, a factor most attributable to Sebren's alternately clean and gutterally aggressive delivery—as particularly evident in some of the band's most recently composed material (i.e. "Leave (Back Up)" and "Pain"—or "Wounds" and "Dead Faces", as they were known in their previous/demo incarnations).

While much of the group's repertoire tends to revolve around the same mid-paced groove that quickly wears thin, STEREOMUD have made significant strides in developing their songwriting skills, with many of the band's reworked compositions (such as "What"—i.e. "Say When"—and the aforementioned "Pain") displaying an increased emphasis on memorable choruses as compared to the material that was included on the group's earliest demo recordings (i.e. "Condescending", "Kill Your Ego" and "Bleak", the latter of which was originally demoed by the final incarnation of LOA—featuring former bassist Alan Robert on lead vocals—under the name "Fly By" and which appears on this disc under the title "Old Man").

At the end of the day, however, the noticeable improvements in the quintet's songwriting skills during the months prior to the recording of this CD have not been sufficient to cover up the fact that STEREOMUD's compositions still come across as too one-dimensional for their own good, a problem that is further exacerbated by the lack of first-rate vocal hooks and the absence of an obvious "single"-type track (in rock radio terms, at least),a factor that is all but certain to put a dent in the group's short-term commercial aspirations.