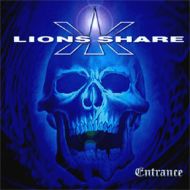 Although an early incarnation of LION'S SHARE existed as early as the late Eighties, it wasn't until the release of the group's 1994 self-titled debut that the band truly came into their own in musical terms, having abandoned their AOR-inspired songwriting efforts in favor of a more progressive, heavier approach. Over the course of two follow-up releases, LION'S SHARE gradually trimmed their progressive edge and toughened up their sound, in the process attracting a more traditional metal audience and establishing themselves as one of the genre's premier—not to mention most underrated—outfits.

On Entrance, the group's fourth studio album and their first to feature new vocalist Tony Niva, LION'S SHARE continue to focus on a more stripped-down, straightforward songwriting style, with guitarist Lars Chriss' dexterious riffing approach perfectly complementing Niva's Tate-meets-Halford wailings, as immediately apparent in the opening pair of "Shotgun Messiah" and "Waiting". For the most part, the group remain within the confines of their own previously established sound and offer very little in the way of surprises, a fact that works in LION'S SHARE favor as they deliver ten tracks of high-quality melodic metal that puts most of the act's competition to shame with its sheer class and conviction.

Unlike a band like HAMMERFALL who draw the bulk of their musical inspiration from the long-running German metal scene, LION'S SHARE are an interesting conglomeration of influences that range in style from the Tony Martin-era BLACK SABBATH to the middle-period MEGADETH to QUEENSRYCHE circa Operation: Mindcrime. As a result, the group's musical output tends to be less easily categorizable and is ultimately more diverse than that of their counterparts, with the band executing the up-tempo rockers like the aforementioned "Shotgun Messiah" with as much confidence and passion as they do the the more laid-back material, such as the excellent ballad "Through the Clouds" (one of my personal favorites).

Not as renowned or as commercially successful as a lot of their less-deserving counterparts, LION'S SHARE are still an unknown entity in most of North America where their music has not gotten a proper release thus far and has consequently been virtually ignored by most of the metal / hard rock media. Entrance is unlikely to change that, unfortunately, but it should serve as a potent introduction to fans of melodic metal who are looking for something fresh and different.