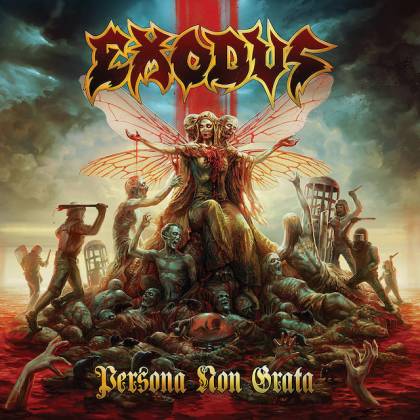 The modern-day incarnation of EXODUS have not been practitioners of the theory that less is more. There's a very strong chance that if a riff was generated by guitarists Gary Holt and Lee Altus during the writing and recording of a new album, it makes it to the final product, whether it be the ambitious 70-minutes-plus bombardment of the "The Atrocity Exhibition…" records from the millennium's first decade, or 2014's "Blood In, Blood Out", which saw the triumphant return of Steve "Zetro" Souza to the vocalist position in a well-received marriage of the band's old-school ethos and modern-era songwriting. For the first time in many years though, the group's plentiful outpouring of metallic bludgeoning feels more exhausting than enduring on their latest effort, "Persona Non Grata".

The standard trademarks of what everyone wants from an EXODUS record are still front and center, overall. Souza's searing snarls have fit very comfortably back into the fold — both in the studio and the live setting — and quickly take prominence once again on the album-opening title track. The buzz-saw rhythm riffs and shredding solos that have personified the band's work emerge quickly and propel the track as a strong opening salvo, but it ultimately ends up not being enough to sustain the full 7-minute running time. Even the cacophonous flourish that elevates the song's final moments can't help the track not feel overstuffed.

Unfortunately, this feeling of bloat pervades other tracks throughout the record that would have otherwise benefited from more judicious editing. Forty years into their career, EXODUS remains one of the best at integrating mosh-worthy grooves into their mayhem, proving that here with "Slipping Into Madness". The mid-tempo riff that powers the track's chorus would have sent a PANTERA pit into a frenzy twenty-five years ago, but it does kind of lose its shine by the third time it shows up at the end of its five minutes. "Antiseed"'s six-minute barrage would be a furious finish for many other records, but here, it just adds to the feeling of numbness that is incurred by the end of the record.

That's not to say that there aren't some fiery rippers that will fit in quite nicely in the live set list. "R.E.M.F." is a fun thrasher that would be a shot of energetic chaos in any era of the band, and every moment that Souza shouts "Mother Fuckers!" from the top of his lungs during the song is pure heavy metal comfort food. "Prescribing Horror" is a moody, mid-tempo trudge that would have been the worst nightmare of the 1980's "Satanic Panic" crowd, punctuated by Souza channeling more guttural registers with his vocal performance, haunting church bells and harrowing cries of babies in distress. "The Beatings Will Continue (Until Morale Improves)" is an infectious three-minute burst of fury powered by a shout-along chorus that is sure to be reverberated vociferously by a live crowd.

There are plenty of indications that somewhere inside the excess of "Persona Non Grata" is a genuinely great 45-minute thrash masterpiece. EXODUS has successfully put together the puzzle pieces from their bountiful output in the past, but the time does now seem to have come where a tighter approach to their next album may be well-warranted.