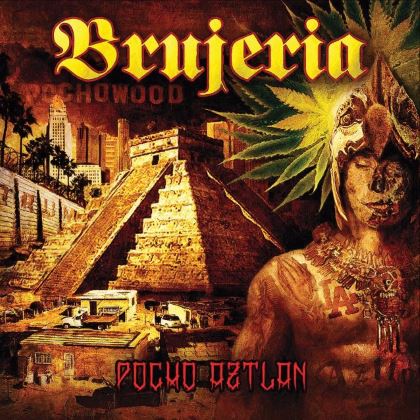 At long last, Juan Brujo and his Mexecutioner collective BRUJERIA returns on album, and what a return! While ghosts of BRUJERIA past such as Dino Cazares, Tony Campos, Jesse Pintado, Raymond Herrera, Adrian and Daniel Erlandsson and Billy Gould are out and about in their respective ventures, Brujo yet retains a full posse on BRUJERIA's new record. "Pocho Aztlan" includes usual suspects Shane Embury, Pat Hoed and Pinche Peach, plus bass contributions from CARCASS's Jeffrey Walker and drums from death metal legend Nicholas Barker (DIMMU BORGIR/CRADLE OF FILTH/ATROCITY/BENEDICTION). Backups amplifying BRUJERIA's violent fury this round come from vocalists El Sangron and Gaby Dominguez, plus additional guitars from Cuernito.

Prior to the release of "Pocho Aztlan", BRUJERIA dropped the "Viva Presidente Trump! " seven inch on 2016's Record Store Day. The vinyl was printed with the colors of the Mexican flag and has become a price-fetching collector's item. For a man hardly shy of letting his political stances hang out, Juan Brujo actually embraces the idea of Donald Trump becoming president, if for nothing else, to stand as a lyrical target in the way Ronald Reagan did back in the '80s. Thus, "Pocho Aztlan" rings, as ever, a death metal-thrash-grind-punk hybrid with all the punk attitude you can handle. BRUJERIA—translated as "witchcraft," in case your head has been left under a rock all these decades, unlike the band's decapitated mascot, Coco Loco—has stood indicted of everything from Satanism to drug running, topics indeed covered inside Juan Brujo's music. On "Pocho Aztlan", however, there's a deeper-rooted message, one exposing a demographic of people who likely feel more persecution than your average and who face widespread ostracizing, the "pocho." Being stationed in Los Angeles, what Brujo speaks of is largely from personal experience, thus making the inflammatory nature of "Pocho Aztlan" even hotter.

Whether you understand what's being said or not on this all-Spanish language album, you can still feel the sarcasm writhing through the title track, which, musically, is more or less a chance to inhabit Juan Brujo's space before the album fully erupts. Police helicopters and American rednecks help paint the hapless picture Brujo sets before his audience. He is a person of Mexican descent who is neither welcome in the homeland nor on American soil, otherwise known as a "pocho." "No Aceptan Imitaciones" rumbles afterwards with bass-bombed grind, taking Brujo's statement to the next level. What must it feel like to be a pocho, a person with no real home, facing rejection even under what should be the protective shadow of heritage. Instead he is branded as a proverbial half-blood, an imitation. It's not for outsiders to judge, but Brujo holds nothing back in exposing the malady of the pocho, and when you understand this better, "Pocho Aztlan", as an album, becomes more imperative.

Bass rages like an earthquake alongside the hammering tempo of "Profecia de Anticristo", a death-core monster carrying nearly unwavering seism, even with the dropped-down breakdowns, which still feel like the West Coast on its dying day. The gang chucks on "Angel de la Frontera" choruses are as hilarious as the mockery of an ecclesiastical chorus swooning behind a mash of screams, barks and shrieks. A newsbyte opens the heated stomp of "Plata o Plomo", a tribute of sorts to late Colombian cocaine trafficker Pablo Escobar. The song's title is translated as "silver or lead," meaning, take the bribe or be killed. Read into that all you like, but it's likely best to let Brujo have his say here and thus keep your distance.

The album then blasts on the rails of hellish hardcore as the rocketing grind of "Satongo" is so perfectly placed on this album that one can imagine the smoke trailing from its leftover carnage. "Isla de la Fantasia", about drug runs gone awry, is stuffed with thrash, grind and hardcore, conveying a contradictory hellhole to the fantasy that Ricardo Montalban and ABC had in mind back in the late '70s. Juan Brujo successfully sends out his attack methods designed to spool around the listener's ears with the full intent of dizzying them. The explosive shootout at the end may ring as sarcastic, but it does leave with a discomfiting haunt, the way gangsta rap used to in the mid-'90s before it went mainstream.

Mainstream would never be tagged to BRUJERIA as the colliding punk-thrash mania of "Mexico Campeon" (and later, "Debilador") is as fast as the band can push it without going full grind. Here is Brujo's conveyance of the pocho as a figurative champion, to be construed both sardonically and straightforwardly. The pocho is effectively a second-class citizen of two bipolar cultures, and yet he has the courage to soldier on despite negative odds of acceptance. Brujo next reserves his cynical indictments against machismo on "Culpan La Majer", translated as "Blame the Woman." If the pocho is second class, then women, Brujo posits, are a tier below. In talking about the song, Brujo jibes, "You got a woman? Blame her. It goes back to Adam and Eve—the woman did it! It's also the old macho Mexican way. Blame the woman."

The 5:35 "Codigos" (assumedly referring to codes, i.e. street ethos) deliberately takes its time getting into gear with echoing, singular guitar strokes, but once it does, it's freaking massive on the reverb from one of the meanest clomps on the album. By now it should be expected "Pocho Aztlan" isn't going to puss out in any fashion. In fact, Brujo and company do their own take of the DEAD KENNEDYS staple "California Uber Alles" with "California Uber Aztlan". No matter how many times you've heard Jello Biafra (who, of course, hung in BRUJERIA in the early days, and once released its music under the Alternative Tentacles umbrella) natter scathingly through this punk classic, you're hardly prepared for the all-Spanish, growling enunciation Brujo gnaws into it.

It may have been 16 years in the making, but "Pocho Aztlan" is one of the year's nastiest, loudest and most intoxicating albums in metal—and punk, for that matter. A new NAILBOMB album seems equally in order as BRUJERIA's ferocious return. The fact "Pocho Aztlan" has so much to say regardless if you speak en espanol or not should fire anyone up who comes to it.