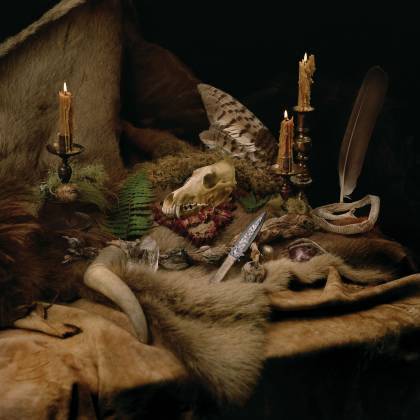 WOLVES IN THE THRONE ROOM

Pacific Northwest black metal collective WOLVES IN THE THRONE ROOM have spent the last two decades firmly establishing themselves as a musical force isolated from the majority of scene politics and accepted imagery. Their fairly minimalist approach to non-musical aesthetics and live performance forcefully keeps focus exactly on their music. The brother duo of Aaron (drums/percussion/keyboards/vocals) and Nathan Weaver (lead vocals/guitars) — alongside a revolving door of various musicians throughout the band's existence — long ago established themselves as generators of engrossing black metal that is overloaded with riffs and atmosphere. Their latest record, "Primordial Arcana", has proven to be well worth the wait since the release of 2017's "Thrice Woven".

The album begins with a fierce outpouring of black metal cacophony. Using "Mountain Magick"'s opening burst to reinforce their abilities to administer a strong aural pummeling. Aaron Weaver has long been one of the more underappreciated drummers in extreme metal, and his abilities to juggle a blackened double-bass attack with arena-level drum fills help power what would have been a fiery opening salvo even with a lesser hand behind the kit. Nathan Weaver's guitar tones are as warm as ever, and his raspy vocals just add to the ethereal atmosphere generated by the group's musicianship, which is also bolstered here by guitarist/vocalist Kody Keyworth, returning for his second album with the group.

Once they have established their ability to deliver fire, WOLVES IN THE THRONE ROOM takes the listener on a winding musical journey in search of other elements, continuing to deliver great rewards throughout. Folk-metal indulgence powers tracks such as "Spirit of Lightning" and "Underworld Aurora", earning their otherworldly titles. The former is powered by an engaging combination of traditional stringed instrumentation, discordant electric riffs and Nathan Weaver's haunting whispered rasps. The latter augments those aspects of the group's sound with chants, tribal drumming, more guttural growls and screams, and a beautifully layered stack of Aaron Weaver's synth keyboard work, whose effort with that instrumentation also stands out gorgeously on the melodic death/doom trudge of "Through Eternal Fields".

The trio adeptly locks into a mosh-worthy mid-tempo groove while maintaining the aura they build throughout the rest of the album. "Primal Chasm (Gift of Fire)" is a showcase of the many musical paths that WOLVES IN THE THRONE ROOM explores, anchored by a powerful guitar groove that encourages steady headbanging before Nathan Weaver comes in for another bombastic barrage of drum-pummeling and fills. That drumming power also fuels the ten-minute journey that is "Masters of Rain and Storm", along with the most venomous riffs and grunts of the record.

The atmosphere and power generated by WOLVES IN THE THRONE ROOM has been undeniable since early in their recorded output, and here on "Primordial Arcana" the trio's current incarnation proves to be exceedingly capable in every diverse extreme they explore.