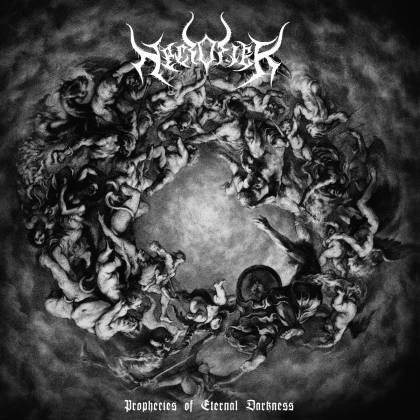 Try to avoid driving or operating machinery when you listen to "The Black Flame Burns" for the first time. The opening track on NECROFIER's debut album has an untamed and dangerous feel to it, as if these Texan reprobates were genuinely channeling evil forces and hoping for a swift escalation in hostilities with anyone silly enough to be nearby at the time. With scabrous gang vocals and an unstoppable, unholy D-beat percussive pulse provided by drummer Dobber Beverly (OCEANS OF SLUMBER / INSECT WARFARE),it's a succinct but lethal thrill ride of punked-up but blasphemous punchiness, replete with subtly insidious melodic hooks. Next, "Darker Than The Night" errs toward a more atmospheric and woozy approach, but still with those malicious undercurrents and a whole heap of infernal muscle backing them up. "Madness Descends" is a malevolent waltz through the flames of Hell, with a psychotic, blast-furnace climax. "Return To Chaos" is a full-on, bug-eyed, blackened grind explosion, delivered at a dizzying pace and yet dense with morbid dread.

The second half of "Prophecies of Eternal Darkness" is every bit as compelling as the first. "Death Comes For Us All" is a frenzied blur of hyper-speed aggro and epic, storm-inciting grandeur; "Unholy Hunger" takes the icy menace of the early '90s and welds it to a bludgeoning, machine-gun kick-drum attack that rumbles and devours like a fleet of Panzers; "Betrayal Of The Queen" slows the tempo, spawning the album's most grotesque and unsettling moments in the process, as NECROFIER's collective eyeballs roll into the back of their devilish skulls and sludge consumes the sonic foreground. The closing "Plague Requiem" — a sparse and evocative ambient instrumental, layered with disembodied voices and peppered with ominous thuds and viscous drones — is a soul-churning climax to cherish.

Black metal seldom lacks convincing exponents, but the US scene has often seemed to be stoically battling against the supremacy of the frozen European north to little avail. NECROFIER sound better equipped for the campaign ahead than most, and "Prophecies of Eternal Darkness" absolutely reeks of authenticity and hellish intent.