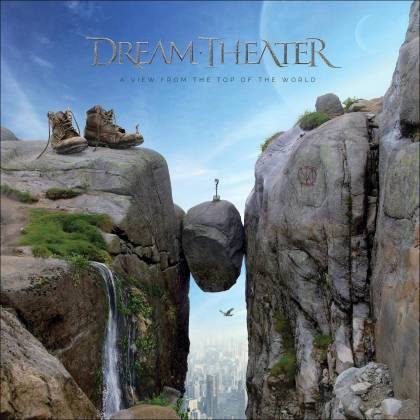 A View From The Top Of The World

1. The Alien
2. Answering the Call
3. Invisible Monster
4. Sleeping Giant
5. Transcending Time
6. Awaken the Master
7. A View from the Top of the World

DREAM THEATER's most recent album, 2019's "Distance over Time", showcased a band that was gracefully aging, three decades into its career. The record was a retreat from the grandiose prog ambitions of 2016's "The Astonishing". The final result was an infectiously heavy record that showed off strong musical chops while also being the group's most confident display of metallic power in the years since, a decade ago, Mike Mangini first sat behind the drum kit. There are no extreme diversions from that regained poise to be found on their newest record, "A View From The Top Of The World". Longtime fans who were pleased with the band moving in a more straightforward direction will once again find plenty of crunchy guitar riffs and immersive keyboards to submerge themselves in among tastefully integrated moments of progressive-metal flash.

The barrage of frenetic guitar riffs from John Petrucci and furious drumming from Mangini — all while keyboard work from Jordan Rudess lurks ominously underneath — that propels "The Alien"'s opening moments sets the tone for the majority of DREAM THEATER's latest effort. Though that burst does transition into a beautifully melodic guitar-solo bridge fairly quickly, the forcefulness of the heavier rhythm riffs end up being the key driver once the proper song begins. Petrucci has always been masterful at balancing that mix of beauty and power with his guitar work, but the moments where that switch gets flipped feel more assured than ever, as does the rest of the band's individual performances. That confidence keeps the momentum going through the album's moodier tracks, such as "Answering the Call" and "Sleeping Giant", both of which are fueled by Petrucci veering more heavily into discordant shredding on his solos.

The balance achieved by Petrucci on guitars throughout "A View from the Top of the World" is also expertly matched by Rudess's keyboard performance. Whether it's "Invisible Monster"'s large orchestra vibes or the juggling of prog-rock organ sounds and piano-based beauty on "Awaken the Master", Rudess is also successful at making those switches in tone and chord progression sound as natural as possible while still remaining in service of reinforcing the album's heavier aspects. The layering of his keyboard work underneath the more guitar-driven aspects of the band's compositions continues to be a high-end example for using that instrumentation to complement each other.

The above praise for the guitar and keyboard work on record is not to discount the reliably impressive-as-always performances of Mangini, bassist John Myung, and vocalist James LaBrie, the latter of whom especially shines on the 1980's AOR radio-rock influenced track, "Transcending Time". This track is the primary diversion from the remainder of the album's foray into more grounded metallic waters, though the amount of guitar-shred contained keeps the track from coming off as comparatively lightweight. That focus also keeps the closing title track engaging throughout its entire 20-minute running time, with twists and turns tastefully layered without descending into overindulgence.

DREAM THEATER is not breaking new ground on "A View from the Top of the World", their 15th studio album. The current ground is poised to remain quite steady though should the paths explored on this and "Distance over Time" continue to be the blueprint for future work.