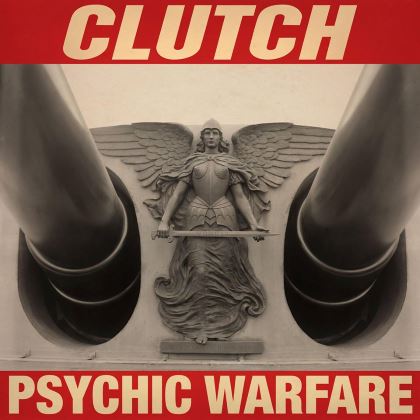 CLUTCH have become an institution of rock, and not just in their home state of Maryland, where you shall be shunned if you consider yourself deep into music and don't know their name. CLUTCH have long been one of the leaders of the sludge rock revival; along with headbangers, their fan base consists of brainiacs, poets, comic hounds and literati due to their imaginative, often highbrow lyrics. Their last outing, "Earth Rocker", was an album that solidified the band's international presence. Holy Christ, what fun CLUTCH's eleventh slab, "Psychic Warfare" is. Here the band goes raw and tears it up.

Neil Fallon opens "Psychic Warfare" with a loose-ended monologue on "The Affidavit". Faint lounge music whispers behind Fallon as he takes a sworn testimony, the "conversation" concluding with his becoming gently "vexed" at album's end. Smarmy as ever, Mr. Fallon. The band rips into "X-Ray Visions", inaugurating an instant CLUTCH classic. Jean-Paul Gaster (called out by Fallon as "Gemini" on the song) snaps a tight, brisk rhythm with clattery but appealing hi-hat taps as Tim Sult (Ares) lights the song's "telekinetic dynamite". Dan Maines (Pisces) flogs his bass as Neil Fallon (Scorpio) snarls some his most brilliant libretti: "Last thing I remember, I was caught up in the ruins, I don't know who's to blame, but I…but I know I didn't do it…when every new day that passes, it keeps on getting stranger, but it doesn't really bother me, 'cuz I get off on the danger". As if being taken over by the spirits of Ronald and Nancy Reagan isn't enough lyrical gold in one song.

Jean-Paul Gaster rolls his way out of "Psychic Warfare" and tumbles into another crashing rhythm on the greasy and heavy "Firebirds". Tim Sult's riffs are both lean and massive as the song calls for them. Gaster's raps get the bigger attention on the verses, while the choruses whump loudly from Sult and Maines's amplifications. CLUTCH drops to a shuffle tempo on the funky and dusty "A Quick Death In Texas", a song carrying enough ZZ TOP (and AEROSMITH, for that matter) nudges to prompt Neil Fallon to mutter "please forgive me, Mr. Gibbons" midway. Fans of "Jam Room" will enjoy Jean-Paul Gaster's cowbell-ridden stomp and jive here.

CLUTCH keeps the sweat dripping on the quick and hilarious "Sucker for the Witch", where not even Stevie Nicks is safe as Neil Fallon jibes "it goes against my Catholic upbringing, I'll admit, but I'm a sucker for the witch." The song is too busy kicking your ass that you might miss a few of Fallon's nyuks along the way: so back this mutha up before moving on to the equally riotous, funk-bombed "Your Love is Incarceration".

The 1:13 instrumental "Doom Saloon" serves as a breath catcher but also as an extensive intro to the slow and trippy "Our Lady of Electric Light", where Tim Sult's psychedelic reverb twitters like sand swirls as prelude to a filmic desert gun down. Quentin Tarantino, consider yourself beckoned. "Noble Savage" hits the gas with fast and nasty blues licks, while the stripped and globby "Behold the Colossus" and "Decapitation Blues" march stoutly with some of CLUTCH's trustiest thunder riffs and clumping beats.

"Psychic Warfare" just might be the finest CLUTCH record of their modern era and certainly their most relentless since 2004's "Blast Tyrant". A CLUTCH album is almost always a treasure, but "Psychic Warfare" trims the fat down to an average of three minutes ("Our Lady of Electric Light" and "Behold the Colossus" knocking close to four) per song and lets force, rhythm and perspiration be their guide.

There's not so much focus here being the sludge and blues artisans that made "Robot Hive/Exodus" and "From Beale Street to Oblivion" critical hits. Instead, there's a willful pride to go old-school and pound it out. "Psychic Warfare" is badass, even for CLUTCH, and the random kicks that belong in some modern Western (in particular the twangy closer "Son of Virginia") makes it an even wilder ride. Nobody's called CLUTCH a stoner band since "The Elephant Riders", but they'll no doubt call them one of the best American bands in the land after hearing "Psychic Warfare". If they haven't already, of course.