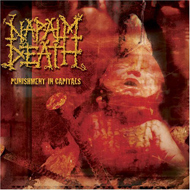 Those who dismiss NAPALM DEATH as mere mindless noise would do well to spend some quality time with "Punishment In Capitals". This 2003 live set, just released in the U.S. for the first time, finds the band well into the renaissance they've enjoyed this entire decade, delivering staccato bursts of technical and progressive grindcore with a tightness and ferocity that's frightening. From their earliest white-noise squalls up 'till the urgent manifestoes of the 2000s, the set (recorded in London at a show benefiting an anti-animal cruelty organization) is a white-hot testament to why NAPALM DEATH are not only a ridiculously important influence on the entire extreme metal scene of the last twenty years, but still reaching new heights of prowess in the modern age.

The recording is an unedited, warts-and-all affair, and it does need to be cranked up a little bit for maximum effect, but the instrument separation is about as good as you're gonna get in music this frenetic. Keeping the musical integrity of these songs together at warp speed has to be a Herculean feat, but these guys' nonstop schedule kept them a well-oiled machine, drummer Danny Herrera particularly, and even the fastest and most oddly-timed songs are delivered as tightly wrapped bursts of tension, chaos kept at bay even as the whole thing explodes into an almost anti-musical holocaust.

It's worth noting, too, that the late guitarist Jesse Pintado was still in the lineup when "Punishment In Capitals" was recorded — he, Shane Embury and Mitch Harris are a killing machine here, playing as with one mind and pushing out a nonstop barrage of riffs that have helped define two generations of grind. This is a fitting memorial for Pintado (much more so than the rather blah TERRORIZER comeback album last year),a document of the man on top of his game and kicking ass in the band where he played such a vital role for so long.

The music of NAPALM DEATH has undergone a lot of changes over the years, with varying levels of acceptance from the metal community. But live, the whole discography hangs together better and makes a lot more sense. Studio niceties (and how ridiculous to even say such a thing in terms of NAPALM DEATH) are sanded away and the band is set like a flamethrower, with vocalist Barney Greenway leading the charge and riling up the crowd. This is one of those live albums that underlines a band's entire reason to exist, whether you're a superfan or have only ever dabbled in their works. It oughta be mandatory for just about anyone who claims to be into extreme metal.