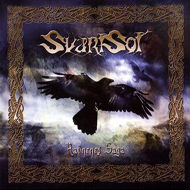 I find it exceedingly difficult to dislike folk metal, at least when it is done as well as it is by bands like KORPIKLAANI. It is just way too much fun and makes me pine for a gigantic glass of beer. It is the muscle of metal, the jumpy, rollicking tempos and "non-metal" instrumentation of folk music that strikes a chord every time. Such is also the case with "Ravnenes Saga" by Denmark's "SVARTSOT," an unequivocally terrific folk metal monster. This baby is hands-down one of the best representations of the genre I've heard this year.

Sung entirely in the members' native tongue and telling outrageous folkloric tales (womanizing, battles, booze, feasts, etc),it is impossible to remain still when "Ravnenes Saga" (translation: "Saga of the Ravens") is playing. At times sounding like what AMON AMARTH might sound like if they played folk metal (listen to "Gravøllet" for a good example),the album's electric qualities are every bit as important as the folk melodies. The collision of worlds is done so well that you're not even thinking in terms of this genre or that genre, but instead rocking the fuck out and reveling in every driving beat and lapping up the sounds created by the mandolin, whistles, and bodhran. Along with the brawny riffs of Cris J.S. Frederiksen and Michael L. Andersen, the disc's metal might is led by vocalist Claus B. Gnudtzmann who brings a deep, gravelly growl to the table, which at times is complemented with an upper range shriek vocal (e.g. "Tvende Ravne").

As cool as the folk elements may be, the boys sure know how to bring the rock on songs like the up-tempo jam that is "Nidvisen" and the equally speedy and incredibly catchy "Festen". Mixing in a few slower, more folk-centric tunes like "Jotunheimsfærden" and "Hedens Døtre" deepens the impact. But it is on the fast paced material where the joining of the two styles really allows the band to shine, and no better example of it exists than on album-closer "Havets Plage". The hot cadence and furious playing leaves you conflicted about whether you should be making an ass of yourself with some kind of folk-inspired dance or starting a bar brawl. And that's what makes "Ravnenes Saga" such a damn good time!