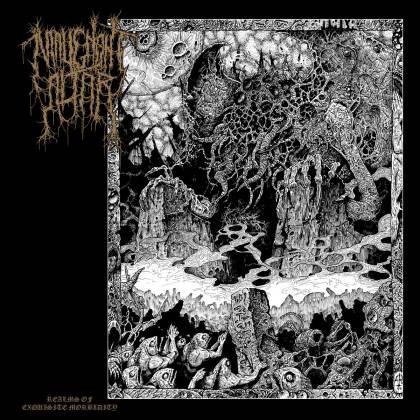 He probably won't thank me for saying it, but the presence of Dobber Beverly on a record is a pretty firm guarantee of quality. MALIGNANT ALTAR can be enthusiastically added to the Texan's impressive resumé, which already features OCEANS OF SLUMBER, NECROFIER and the legendary INSECT WARFARE, among many other projects. As with all of the aforementioned, this latest dive into the dark is the work of a bona fide band, not some mere side project, and "Realms of Exquisite Morbidity" resounds with clarity of vision and a self-evident, shared devotion to old-school death metal that should warm the heart of any ageing misanthrope. Or to put it more simply, this is absolutely fucking filthy.

Neither slaves to a 30-year-old sound nor victims of modernity's sterile edge, MALIGNANT ALTAR have struck a superb balance between disgust and destruction here. Guitar tones are corrosive and treacly, Beverly's drums are laudably live sounding but punch as hell, and vocalist Wilson Prevette sounds very much like something blank eyed and bloodthirsty that has just emerged from a nearby swamp. Opener "Channeling Impure Apparitions" is an unholy joy: six minutes of suppurating malevolence, with welcome echoes of INCANTATION at their excoriating best, and some of the ugliest riffs of the year. "Usurping the Pantheon Crown" is even better, as MALIGNANT ALTAR notch up the intensity with riffs that reek of mid-'90s Scandinavia, bursts of feral, black metal speed and a final, crippling descent into death-doom oblivion. "Belial Rebirth" hoovers up a handful of BOLT THROWER's magical war dust, switching from slow-motion torrents of sludge to rabid explosions of jagged spite.

Again, the prevailing atmosphere is one of heroically blasphemous filth, and MALIGNANT ALTAR revel in every foul, unpolished second. Heaviest of all, "Ceremonial Decapitator" somehow combines the lumbering, ragged gait of AUTOPSY with the barreling, inexorable pomp of MORBID ANGEL: it's a masterful piece of death metal songwriting, and its final riff will give you nightmares. The closing "Rite of Krasue" is very nearly as potent, with its barrage of atonal scree and several more righteous keeper riffs.

Somehow, despite all that gruesome majesty, 34 minutes does not feel like enough. This is yet another true-to-the-bone death metal gem for the old-school purists to drool over, but it is also record with its own idiosyncratic and deeply warped personality. And yeah, the guy playing the drums is a certified badass.