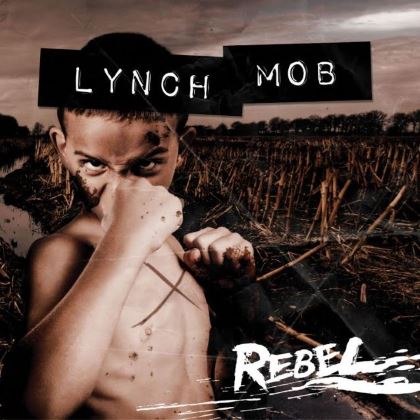 George Lynch and Oni Logan soldier on with LYNCH MOB and "Rebel", an album worth dialing into more than usual as it features Lynch's DOKKEN comrade, Jeff Pilson along with troubadour drummer Brian Tichy, who played a stint before from 2012 to 2013. LYNCH MOB will be represented onstage this year with prior alumni Jimmy D'Anda (also from the BULLETBOYS) and Sean McNabb. For "Rebel"'s purposes, Pilson and Tichy are as much the story as Lynch and Logan as the foursome lays down one of the tightest, if leisurelier LYNCH MOB albums to date.

Opening with the lumbering though snug "Automatic Fix", Pilson and Tichy provide a muscular rhythm section behind George Lynch's strolling riffs and Oni Logan's swaggering croons. Certain parts are reminiscent of DOKKEN where Lynch and Pilson fall into old turf as if snapping off their own "in" joke, but they bounce right out and keep this song throbbing on its own accord. While the song might've been better shaved a minute of its 5:48 playing time, "Automatic Fix" is strong, particularly with Brian Tichy's cascading rolls. Stepping up the tempo a click on the jive-driven "Between the Truth and a Lie", George Lynch and Jeff Pilson ride in tandem as Oni Logan huffs calmly, as if caught in their trance.

A trance is what Lynch and Pilson induce on the slow and blaring "Testify" and "Pine Tree Avenue", and they never lose one another trailing up and down in snaky measures on each song. The latter places more emphasis on blues where Lynch unglues with freestyle during the verses. Pilson's wavy bass lines on the stepped-up "Sanctuary" gives Oni Logan a concave platform to recoil his higher octaves.

"Rebel" bounces back and forth in rhythms without pushing past mid-tempo, be it the grimy drag of the AEROSMITH-stuck "Jelly Roll" or the hip-shaking blues chug of "Dirty Money" (featuring a chorus reminiscent of THE O'JAYS' "For the Love of the Money", also covered by the BULLETBOYS) where Pilson's bass burps are as juicy as the key filters buzzing overtop George Lynch's dragged-down riffs.

As "Rebel" doesn't have a ton of urgency in pace (the fastest beat coming on the closing track "War"),it has droves of it from Jeff Pilson and his presence not only affects Lynch's playing but Oni Logan's singing. Because of the instinctive bond between Pilson and Lynch, Logan sounds perfectly relaxed. He's effervescent on "The Ledge", one of the slower-drawn yet vivacious tracks on the album and containing one of George Lynch's most charming performances. DOKKEN fans will likely never see Pilson and Lynch (along with Mick Brown) in the same recording space as Don Dokken again, but "Rebel" will readily satiate their hankering.