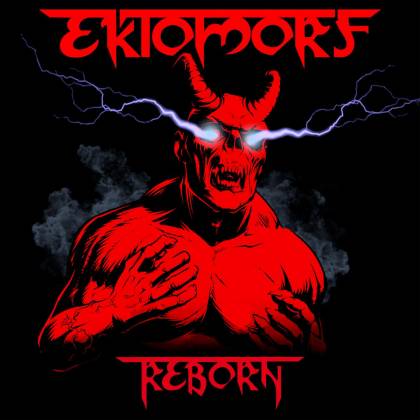 Determination personified since 1994, EKTOMORF have been omnipresent and unrelenting over the last two decades. Batting away the obvious geographical disadvantages of hailing from Hungary, Zoltán Farkas's band have toured and recorded relentlessly, earning the respect of a sizeable following, both in Europe and internationally. Admittedly, EKTOMORF have always seemed to exist out of time, at least in musical terms, adhering to a blueprint laid down in the '90s by, let's face it, Max Cavalera, and occasionally twisting it to their own subtly eccentric demands. Of course, the usual elephant in the room is present, correct and wearing a SOULFLY T-shirt throughout "Reborn" too, but EKTOMORF do this stuff so well, and with such conviction, that it would be churlish to lambast them for sticking to a well-worn formula. The band's fifteenth (yup, fifteenth!!) studio album is unlikely to shock anyone that has enjoyed them over the years, but while it does arrive armed with shit-tons of the brutish, groove metal riffs that have long been the core of EKTOMORF's sound, there are a few significant detours and evolutionary steps to be unearthed here too.

The first two tracks ensure that everyone gets a smack in the chops early on: "Ebullition" is a fiery rampage with a thrash metal heart and "Reborn" rumbles and pummels like the last 20 years never happened, but with a grandiose, METALLICA-esque instrumental section in between bursts of brutality. Speaking of which, there is an unquestionably "Orion"-tinged vibe to "Forsaken", a seven-minute instrumental, taking EKTOMORF beyond their usual electrified but primitive boundaries and into a new and gently progressive realm. Frankly, it really suits them and there are other, similar glimpses of a more adventurous future lurking in the haunted slurry of "And The Dead Will Walk" and the acoustic-led, blitzkrieg stomp of "Where The Hate Conceives". Both tracks are comfortably within their creators' wheelhouse, but with plenty of rough edges and spiky sidesteps.

That title certainly suggests that Farkas views this album as a new milestone for his band, and it's plainly one of the strongest, smartest and most memorable records they have ever made. Whether the world will ever truly succumb to EKTOMORF's (almost) unique charms remains a mystery, but when it comes to (a) playing heavy music like your life depends on it and (b) never giving up, no matter what, well, "Reborn" sounds like as good a manifesto as any.