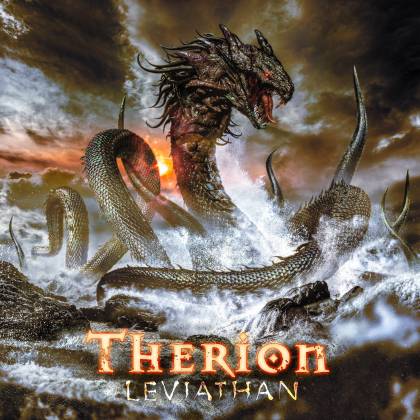 Three years ago, THERION released one the most insanely ambitious albums in metal history. Three hours in length, "Beloved Antichrist" was a heroically indulgent symphonic rock opera, even by the Swedish band's already exacting standards. What it definitely wasn't was remotely accessible, at least to all but the most devout and obsessive of fans. Doubtless many regard it as creative driving-force Christofer Johnsson's masterpiece, while plenty more will have abandoned the album before the halfway mark. It was, it hardly needs saying, something that delighted diehards and daunted everyone else.

Fortunately, THERION have changed and evolved so many times since forming as an aspiring death metal band back in the early '90s that Johnsson has long since freed himself from any and all expectations. As a result, "Leviathan" could easily be viewed as a somewhat self-conscious return to more straightforward and vigorous symphonic metal, broadly akin to what the band were doing back on "Sita Ahra" a decade ago but with a greater emphasis on a classic metal sound. Equally, this could be perceived as simply the next step along the road for a genuinely unique band. The motivation is unclear, perhaps because THERION have never lost the mystique or singularity that made earlier albums like "Lepaca Kliffoth" and "Theli" so distinctive and influential, and so the only course of action is to go with the flow and enjoy what are some of the snappiest THERION tunes in a long time.

Kicking off with an ultra-traditional metal riff, opener "The Leaf On The Oak Of Far" immediately slams down the gauntlet to symphonic all-comers. Done and dusted in under four minutes, it's a refreshingly simple statement of intent, albeit one with multi-layered vocals and enough underlying pomp and power to crack a mountain. Similarly, "Tuonela" is grandiose enough for any fan of "Beloved Antichrist", but it's also a beautifully succinct heavy metal song, with flashes of folksy melody and a chorus large enough to block the path of a longboat.

The sheer power and control that vocalists Thomas Vikström and Lori Lewis display throughout this record deserve some kind of trophy. Because while it's undeniable that this kind of operatic, theatrical metal is never going to hit the spot for everyone, THERION's self-evident mastery of the form remains a spectacle in itself. As the album progresses, through many more shrewdly economical but fervently over-the-top tall tales, it's hard to ignore the fact that this is much more entertaining and, whisper it, fun than the occasionally turgid meanderings of its predecessor. Of course, having redefined themselves many times before, THERION may well be doing something completely different again next time. But while they have your attention, "Leviathan" is a great, if unashamedly over-egged, heavy metal record.