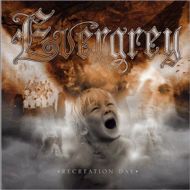 Though not the most achingly essential heavy metal outfit to have bounced around the inside of your cranium, EVERGREY, you sense, are approaching that "special something". And when we refer to such a thing, we're talking about that which drove the CYCLONE TEMPLEs or the HITTMANs of this world (anyone?) — those bands that came from nowhere, ultimately ended up nowhere, but made some heady sounds along the way and were criminally undervalued.

EVERGREY come from Gothenburg, Sweden: that current hotbed of riffs and rage where bands seemingly compete to come up with the most off-the-wall musical arrangements possible. In truth, like everything else, it's all starting to get a bit old. Lucky, then, that EVERGREY have had a four-album head start to separate themselves from the stagnating pack and hone their sound into a far more shapely entity.

They rely not on thirty-note riffs — like a fair proportion of their peers — but the loping, bottom-ended chug, the swooping/soaring vocal and the flourishes of keyboard-backed quirks. Before you jump to conclusions, RHAPSODY this is not.

"The Great Deceiver" is an exemplary choice of opener, roping in all the aforementioned elements to make a track that really romps home in style. If only "Recreation Day" exuded such grace and power throughout, it would be a real colossus. And while they do a sterling toughening-up job on a Swedish throwaway pop "classic" (having not heard it, we can only assume that DILBA's original "I'm Sorry" could be considered as such),there are still noticeable fillers such as "Blinded" and the nine-minute acoustic sprawl, "Trilogy Of the Damned", which isn't the greatest advert for unplugging those distortion pedals.

As we said, they're still a few songs away from greatness. But, you still feel, it's a matter of sooner rather than later.