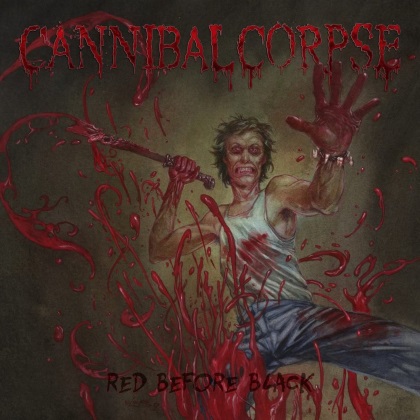 I've enjoyed a lot of entertaining interviews in my time, but for coddling the horror nerd in me, no one beats Alex Webster from CANNIBAL CORPSE. As much I wheedled away half my allotted time yakking about comic books with Sebastian Bach, I did likewise with Alex Webster on the horror tip. Before we ever got on topic about CANNIBAL CORPSE's "The Wretched Spawn" in 2004, we were deep in discussion about Italian giallo flicks such as "Deep Red" and "Tenebrae" (also known as "Tenebre"),along with the most revolting splatter films ever shot (from which the band naturally derives its namesake): "Cannibal Holocaust" and "Make Them Die Slowly" (also known as "Cannibal Ferox"). We enjoyed a laugh over Troma films ("Rabid Grannies" gaining the biggest laughter) and the stupidly fun "Redneck Zombies". Suffice it to say, the guy, along with his death-grind horde, knows his shit with this stuff. You have to if you want to pass off nefariously filthy songs like "Meat Hook Sodomy", "Entrails Ripped From a Virgin's Cunt", "Post Mortal Ejaculation" and "Fucked With a Knife" as serious death metal.

Don't look now, but CANNIBAL CORPSE is about to hit its third decade of dung-heaped decadence, and for anybody's money, this (along with CARCASS, CRYTOPSY, NAPALM DEATH, MORBID ANGEL and AUTOPSY) is still a band to measure up to in this style. The group's 14th album, "Red Before Black", changes nothing, only finesses the style, as the band has from 2009's "Evisceration Plague" on through. No surprises, just reliably brutal music for people who celebrate Halloween every day.

You can't ask for a nastier opener than "Only One Will Die" as Paul Mazurkiewicz leads the grueling charge with a blasting tempo for George"Corpsegrinder"Fisher to do what he does better than nearly anyone—ralph the crap out of any open space not occupied by drum or guitars. As ever, Alex Webster's bass trails fluidly behind Pat O'Brien and Rob Barrett, and this is why CANNIBAL CORPSE remains one of the finest of its ilk. Synchronized mayhem being the unit's specialty, the brute force spills into the raging title track, and the band's tightness is something still to marvel at—no matter how many times you've heard these blitzing arrangements before. The anticipation of Pat O'Brien's sizzling guitar solo may be the only element of suspense, but the flailing thrash is so succinct you're readily glued.

The slow, sickening tones on "Remaimed" are dripping audile gore, interchanged with the faster passages, all cooler than hell blown over by a fart from an ice god. Appropriately, this gets answered in kind by "Firestorm Vengeance", which takes off after a bit of curious puttering. "Corpus Delecti", similarly styled with the slow lead-in and bombarding measures thereafter, are all gloriously gruesome.

"Code of the Slashers"—a damned unnerving prospect, if you think about it—makes you wait for it, but the hyperactive speed flung from the song's opening slog is a great payout. Nice to see CANNIBAL CORPSE cajoling the group's listeners a bit instead of swinging its brutal mallet right out of the gate: in this case, cold steel in your face, vocally meted out by George Fisher. As they often do, CANNIBAL CORPSE minces classic power metal with its broiling death modes, dishing up brain-busting signature verves on "Shedding My Human Skin" and "In the Midst of Ruin", the latter boasting some of the album's meanest G-forces.

"Evil Dead" fans will flock straight to "Heads Shoveled Off", no further elaboration needed. Alex Webster's bass knocks to the opening of "Scavenger Consuming Death" are purposefully putrid as the subsequent breezy thrash passages are tailor-made for the hair pinwheel addict. If CANNIBAL CORPSE was even remotely holding back on the songs prior, the ferocious "Destroyed Without a Trace" rings exactly thus. It could've been a perfect album closer on its own, as Pat O'Brien's call-and-answer guitar peals are beautifully savage. However, there's still "Hideous Ichor" to go before you're finished for this round.

If anything, "Red Before Black" proves there's monster mileage pooled in this band's reserves. CANNIBAL CORPSE may not have to be so overtly obscene as to write another "Orgasm Through Torture", since its punishing sound is perverse enough. "The Human Centipede" films out-gross CANNIBAL CORPSE de facto for forced fecal devouring alone; fortunately, "Red Before Black" is less nauseating and much more pleasurable.