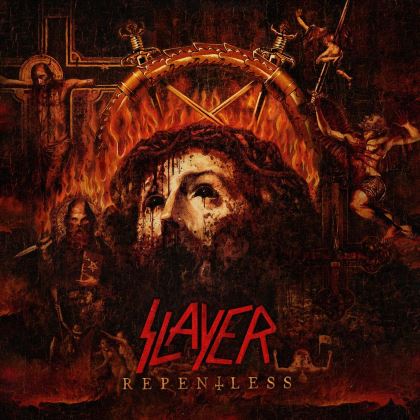 SLAYER's new album, "Repentless", the band's 12th, debuted at Number Four on The Billboard 200 chart. Yes, that actually happened. While this kind of pop cultural seal of approval is essentially meaningless in the world of metal, it really is about time, and considering SLAYER's long-standing contribution in making metal an ever-present bloodstain upon the global musical landscape, it's well deserved. The release has also topped charts internationally. It's a shame that founding guitarist and songwriter Jeff Hanneman wasn't around to see it.

Hanneman's early eighties punk and hardcore leanings spiked the band's initial heavy metal mix with the potency of a molotov cocktail, turning SLAYER into the unique beast that has defined and shaped metal in so many ways. He sadly died in 2013 due to cirrhosis of the liver, and it remains to be seen if his passing will be the band's fatal blow. Judging by what "Repentless" has to offer, it seems that Jeff's death might actually mark the end of SLAYER's creativity. Perhaps they cannot make quality SLAYER music without Jeff.

If Hanneman's passing wasn't enough of a shake-up, founding drummer Dave Lombardo parted ways with the band over a financial dispute, meaning half of the band's original lineup was gone. However, none other than Paul Bostaph, SLAYER's drummer for the bulk of the nineties, once again replaced Lombardo with his unquestionably impressive skills.

EXODUS's Gary Holt, who has played live in place of Hanneman for a few years, contributes guitar solos to some of the "Repentless" tracks, yet he essentially remains a hired gun, with SLAYER's co-founding guitarist Kerry King steering the ship creatively. Indeed, King composed the entire album aside from co-writing "Atrocity Vendor" with bassist/vocalist Tom Araya. It is one of the disc's few songs that rages with the menacing fury of old SLAYER, a track immediately following "Piano Wire", the only tune Jeff Hanneman contributed writing toward, a charging number true to his rabid style.

The infamous dueling solos of Hanneman and King are sorely missing. Neither musician is known for any kind of overwhelming virtuosity, but their punk and metal styles, respectively, collided with reckless abandon and an undeniable sense of tension that had an almost magical quality.

SLAYER has been known and admired for remaining consistent, because many tend to overlook some of their hiccups, like their brief flirtation with rap metal. Tom Araya rapping on "Stain of Mind" was not one of their greatest moments. However their entire career has generally remained on a direct path, fostering the proper conditions for a loyal, devoted fanbase. They have rarely made any drastic left turns. But the consistency has led to a sense of complacency.

"Repentless" is a good, logical album for the band in terms of their career in music, but it's not a shining moment for them creatively. It isn't necessarily a bad album, yet it isn't really that good either. It's boring and predictable. Perhaps even limited forays outside of their box could have maintained a more interesting trajectory now and in recent years.

Lombardo stepped outside SLAYER with FANTÔMAS, PHILM and other projects. Why couldn't any of his new creative pathways been carved into SLAYER's map?

Some argue that SLAYER are regarded as highly as they are because of their relative consistency, but had they tastefully ventured further, the results may have been more fruitful than what we've tasted in recent years, and certainly with "Repentless".

The fact that the SLAYER members are kicking and screaming collectively at the half-century point of their lives is an impressive accomplishment, to be sure, and their tenacity is that much more jaw-dropping considering the loss of two founding members from the fold. But if you're going to raise a Heineken in Jeff Hanneman's honor, it will most likely be backed by the haunting, moon-worshiping sounds of "Show No Mercy" or "Hell Awaits", or the belligerence of "Reign in Blood" or "Divine Intervention".

SLAYER has nothing to repent for, and they deserve the commercial success they've already achieved with "Repentless" due to the indelible mark they've left upon heavy music and beyond. None of that, however, changes the fact that "Repentless" is a forgettable, lackluster album that hopefully doesn't represent the best of their current capabilities as a band.