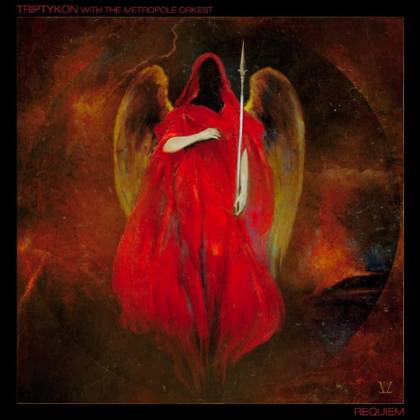 Tom Gabriel Warrior is inarguably a heavy metal legend, a forefather of extreme metal and avant-garde metal. He began with the early eighties barbaric rumbling of HELLHAMMER, which was the precursor to the more energized, hard 'n' heavy and eventually experimental work of CELTIC FROST. That band eventually returned after years of inactivity only to make way for the modern, ethereal crunch of TRIPTYKON. It is under the TRIPTYKON moniker that Tom is finally unleashing what has been decades in the making. "Requiem", recorded at last year's infamous Roadburn festival, is now being unleashed during the pandemic via Prowling Death and Century Media Records. The ambitious release successfully reaches grandiose and dramatic heights in symphonic, goth-leaning doom metal.

"Requiem" is divided into three chapters. The first part traces back to CELTIC FROST's 1987 sophomore effort "Into the Pandemonium" with "Rex Irae", followed by a relatively newly written midsection titled "Grave Eternal". The expression concludes with "Winter" which was culled from CELTIC FROST's 2006 swan song "Monotheist". Keeping chapter one in mind as the starting point, Tom Gabriel Warrior has been working on the project for an excess of 30 years. He and his cohorts have realized his old vision with the assistance of guest vocalist Safa Heraghi and the Metropole Orkest, the Grammy-winning, Netherlands-based hybrid orchestra.

Tom fully indulges in his passion for avant-garde art with the full classical orchestration that is magnificently executed by the orchestra. The first chapter, "Rex Irae", looks back at FROST's early stage when they bridged the divide between knuckle-dragging caveman heaviness and something that was significantly more sublime and experimental. The updated take on the track lacks the initial version's bite, yet the low-end frequencies are in tow in a gothic doom performance of the song that's considerably dark and drab.

The following chapter, "Grave Eternal", is the only new song on "Requiem", and it's a marathon. Running in excess of 32 minutes, divided into six tracks, "Grave Eternal" finds Tom thoroughly utilizing the symphony orchestra's expansive capabilities. Ironically enough, "Grave Eternal" boasts the epic spirit of heavy metal, but in terms of sonic artistry, this extended song is one that can barely be described as metal at all. That is fine, but what isn't okay is the fact that the song is meandering for significant portions without going anywhere significant.

"Requiem" concludes with the dreary track "Winter". The song is bleak, performed with a sense of drama and conviction. The enveloping darkness that seems inherent to Tom Gabriel Warrior's playing seems to ooze forth on this song, filling the gaps that had been wedged open by the doom-like pace. Tom's music has always evoked feelings that rest on the balancing point between melancholy and depression. "Winter" is a perfect example, augmented on "Requiem" with the impressive and numerous guest musicians involved.

"Requiem" was a bold endeavor. Tom Gabriel Warrior has changed the face of music by being bold and adventurous. He hasn't always hit the ball out of the park. (Never mind "Cold Lake": have you heard the embarrassingly awkward hip-hop flavored demo "Prototype"?) But his childlike curiosity for music is what has helped him push the envelope. "Requiem" has been performed and executed with precision and passion. TRIPTYKON and company have successfully crafted a symphonic and gothic doom release that often references the classic sounds of FROST. "Requiem" is enjoyable, but far from essential beyond those who are completists.