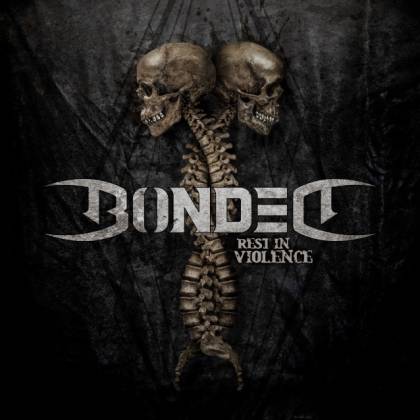 Contrary to popular belief, thrash metal really didn't need to be revived in the mid '00s. What ended up being resurrected and given a new lease of life was old-school thrash, and the furious, crossover substrain in particular. And while there was absolutely nothing to dislike about the rise of MUNICIPAL WASTE and their retrogressive peers, that whole phenomenon did a significant disservice to the countless modern thrash bands that had kept the genre alive during a tricky era. BONDED know what I'm talking about: "Rest In Violence" is an absolute godsend for fans of the kind of skull-flattening, super-polished thrash-meets-groove metal that has been propagated effectively by old-guard icons EXODUS and DESTRUCTION, but also by the likes of DEW-SCENTED and (most recently) HATRIOT. This is defiantly modern stuff, sonically monstrous throughout and more concerned with giant hooks than with self-consciously emulating something more avowedly classic.

With two former members of SODOM, one ex-member of SUICIDAL ANGELS and vocalist Ingo Bajonczak from cult German thrashers ASSASSIN, the pedigree of this newly minted unit is unquestionable. All of that would be worth nothing if they didn't have the songs to back it up, but BONDED certainly have plenty of those: "Suit Murderer" is a flat-out riff bombardment with a wickedly grim hook; "The Rattle & The Snake" is a joyous, timeless, none-more-metal anthem with lashings of blazing lead work; "No Cure For Life" is a menacing descent into slower tempos and morbid grandeur, with faint shades of CROWBAR for added weight. Best of the lot, "Where Silence Reverberates", hurls some blackened disquiet into the mix, with a textbook lumbering, melodramatic intro buildup and transitional riff that sounds like a panzer swarm in hell, before the song itself erupts and slams like Satan's dungeon door.

It's all thrillingly brutish and precise, but also supremely assured: the sound of weather-beaten veterans re-asserting their authority and having a fantastic time in the process. It's also a modern thrash record that honors the genre's basics while never forgetting that heavy metal is a malleable thing with limitless possibilities for destruction.