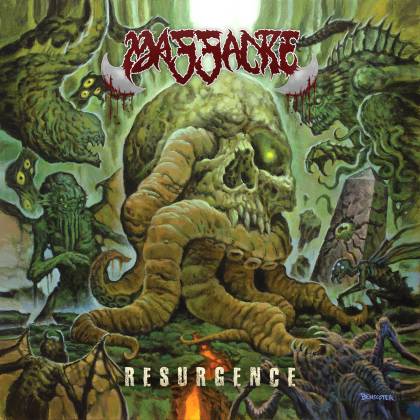 The legendary Floridian death metal band MASSACRE has returned from the beyond. The seminal act's roster, past and present, has included musicians from bands such as KREATOR, DEATH, OBITUARY, NASTY SAVAGE, SIX FEET UNDER, DOWN BY LAW and more. Remarkably, the sheer number of musicians involved has exceeded a couple dozen. In recent years, core, longtime members Rick Rozz and Terry Butler have departed, and in certain cases the splits have been acrimonious, to say the least. In any event, a couple of members involved with the band's classic era (vocalist Kam Lee and bassist Michael Borders) have brought in new blood (drummer Brynjar Helgetun and guitarists Scott Fairfax, Rogga Johansson and Jonny Pettersson) to release the band's fourth album, "Resurgence". While the album doesn't reach the high watermarks set by the unit's infamous debut, it certainly will scratch the itch of many who are yearning for an authentic taste of late eighties, early nineties death metal glory.

Some would contend that the lineup behind "Resurgence" isn't representative of the "true" MASSACRE, and in fairness, the blade cuts both ways, as Borders mentioned via a press release, "Our loyal longtime fans will instantly get it. They will be, 'Cool, a real MASSACRE album — not a fake one.'" Bands change over time in countless ways, from sound and style all the way over to personnel, and the new members are not newcomers to the genre. The lineup very much constitutes a legitimate band that clearly has chemistry.

"Resurgence" is head and shoulders above MASSACRE's second and third albums, 1996's "Promise" and 2014's "Back from Beyond". Lee and company have expressed their intentions for "Resurgence" to stand as the proper follow-up to "From Beyond". Similarly, the way that album's savage opener "Dawn of Eternity" starts with a teasing, epic intro, so too does "Resurgence" begin with a comparable intro and lead-in riff with "Eldritch Prophecy". MASSACRE strike a fine balance between raw, classic death metal and a version of metal that's more contemporary, augmented with touches of melody. This isn't a negative, however, "Resurgence" is a winner because it isn't a simple rehash.

"Into The Far-Off Void" is another standout track, one that will invariably scratch the bellies of the old guard. It sounds like a song that fans wanted to hear on their nineties, sophomore effort, "Promise". "Return Of The Corpse Grinder" rounds out the album with what's more than an overt nod and wink to "Corpse Grinder" from "From Beyond", a dirty little ditty about grave desecration and necrophilia. It's a worthy, utterly savage and catchy "part two" to the classic song MASSACRE technically covered from DEATH's demo "Reign of Terror". For those unfamiliar, Kam Lee and guitarist Rick Rozz were two-thirds of DEATH's line-up on that 1984 demo. And yes, CANNIBAL CORPSE vocalist George "Corpsegrinder" Fisher's first band used that moniker before it became his nickname.

Expecting a classic band to reach the stars in the same way that it once did is an unfair expectation, but it is an inevitable one. Sure, "Resurgence" isn't going to leave the indelible impression that "From Beyond" did. But there is no question that "Resurgence" is a fantastic, "true" death metal album that should satiate both elitists and newbies alike.