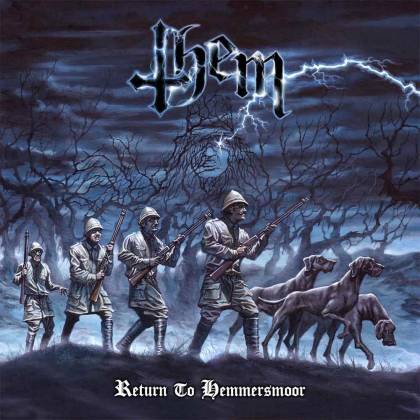 Originally formed as a straightforward KING DIAMOND tribute band, THEM have long since outgrown their initial masterplan and evolved into the one of the most entertaining heavy metal bands on the planet. If you missed the international sextet's first two albums, 2016's "Sweet Hollow" and 2018's "Manor Of The Se7en Gables", you missed out on some of the most uproarious horror-themed metal this side of, well, you know who. And while vocalist Troy Norr is undoubtedly capable of doing a fine impression of the aforementioned Dane, he has brought more than enough of his own, warped personality to bear on the band's works to date. The truth is that "Return To Hemmersmoor" deserves to reach an audience far beyond the rather niche minority that, in essence, will listen to anything that sounds like KING DIAMOND. I include myself in that group with no apologies, but THEM are following their own crooked and fascinating path at this point.

With plenty of moderately goofy dialogue and exposition thrown in to elucidate the album's core story, "Return To Hemmersmoor" is the consummate, immersive old-school metal experience, but one with a very punchy, modern production. The story itself is wonderfully preposterous, of course, and deserves to unfold without spoilers for first time listeners. But what strikes home throughout the band's third album is how their initial debt to "Abigail" and "Them" has mutated into a more muscular and anthemic strain of melodic metal, full of dynamic quirks and singalong splendor. Still offering plenty of room for Norr's multiple voices and mind-bending array of falsetto shrieks, songs like "Age of Ascension" and "Free" have huge hooks and an incisiveness that was only hinted at on previous records. The best songs here — the stately but intricate "Fields of Immortality" and the shadowy rush of "Hellhounds: The Harbingers Of Death" spring to mind – add shades of epic doom, arena-friendly cock rock and even a dash of prog metal to an otherwise stoically traditional formula. It's all vividly rendered and classy as hell.

Most importantly, THEM are boisterously reviving the notion of heavy metal as bombastic, theatrical and sworn to the mischievous black. Long overdue some real recognition, their latest ripping yarn is horrifyingly good.