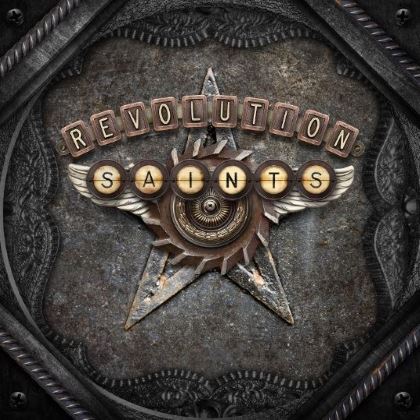 Frontiers has quickly asserted itself as a hub for seasoned hard rock artists to not only hang their hats for work, but to collaborate and form new entities. SWEET & LYNCH being one of the more recent musical marriages under the label's banner between STRYPER's Michael Sweet and guitar lord George Lynch, Frontiers now unleashes the unified trio, REVOLUTION SAINTS.

"Back on My Trail" sounds like old SAGA and LION here and on much of the album, straight down to the gusting verses and elevating choruses. The song grows strength after a cautious plod in the opening verses. Deen Castronovo opens up his drum rolls to match his breezing vocals while Doug Aldrich puts more authority into his guitars and lights up a snazzy solo along the way. Accordingly, "Turn Back Time" does that very thing (as do "Locked Out of Paradise", "Dream On", "Strangers to This Life" and "Here Forever"),playing all the trump cards of Eighties hard rock with such gusting convincingness you're wont to feel a new "Iron Eagle" or "American Ninja" film and accompanying soundtrack are inevitable. Why not? We have a new "Rambo" flick on the horizon.

Arnel Pineda graces the slower power anthem "You're Not Alone", which bobs along nicely upon a tight rhythm and caressing keys and piano. Pineda's terrific, suffice it to say, as is Neal Schon, who provides extra textures to the acoustic-led, later-amped ballad, "Way to the Sun".

"Don't Walk Away" is a trusty heart-plucker that unfortunately hangs around too long at close to six minutes despite a swooning chorus that would've woven the right aroma for makeout sessions of the day. On the flipside, "To Mend a Broken Heart" stamps the album's hardest riffs and humps the always-reliable scorned love theme like a jilted champ.

While not for too many audiences outside the forty and over bracket, "Revolution Saints" is a classy, melodious and sentimental walk back to when commercial hard rock was king. An album like this in 1986 would've been an automatic chart burner and cheers to Blades, Castronovo and Aldrich for treating this moment like an automatic chart burner is imperative to their inner fabrics. The only fault of this album is that is carries its punchline one too many times, yet "Revolution Saints" will easily strike the fancy of its target audience. An obligatory "Iron Eagle" marathon is probably in order after hearing this one.