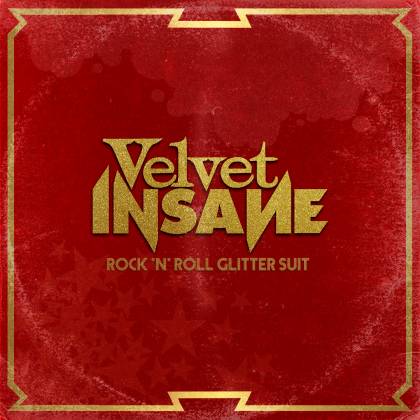 It is a known fact that the Swedes are exceptionally good at rock 'n' roll. They are also exceptionally good at death metal and crusty hardcore, amongst a huge number of other genres, but snake-hipped and resolutely cool-as-fuck rock 'n' roll is something of a specialty. VELVET INSANE adhere to every brilliant tradition that you might anticipate from a band with songs bearing titles like "Backstreet Liberace" and "Space Age DJ". Cut from the same, sequined cloth as their many forebears, they follow proudly in the footsteps of THE HELLACOPTERS and BACKYARD BABIES, but with an added frisson of sparkly eyed glam rock abandon and lush, symphonic pop harmonies and embellishments thrown in to make every song even more uplifting. From the opening seconds of "Driving Down The Mountain" onwards, "Rock 'n' Roll Glitter Suit" is clearly designed to be one giant, sustained blast of rowdy, tightly trousered fun: a car revs up, a riff kicks in, and the party starts.

You do need to be in the mood for this stuff. Like some long-forgotten, blues-trained bar band from the mid '70s, beamed into the present day to cheer us up a bit, VELVET INSANE are remorselessly exuberant. Assuming you can stomach such innocently offered good vibes, "Rock 'n' Roll Glitter Suit" may be the exact antidote required to lift you from your post-lockdown torpor. The aforementioned "Backstreet Liberace" (featuring cameos from both Nicke Anderson and Dregen, for maximum Scandi-rock points) is a loose-limbed garage rock wonder, with boisterous piano-thumping, handclaps and power-pop harmonies coalescing around an irresistible chorus hook. Likewise, "Velvet Tongue" is both radio-friendly and riotous: an unfussy, pop-rock gem with a boogie backbone and a gently misty-eyed refrain. The Swedes can do laid back, too. "Sound Of Sirens" has a faint air of OASIS in its sauntering gait, while "Midnight Sunshine Serenade" is a pretty and poignant campfire jangle, with a sweetly understated vocal from frontman Jonas Eriksson. After that, "Space Age DJ" seals the deal with the kind of strutting, nerd rock perfection that generally seems to happen within Swedish borders these days, while the closing "You're The Revolution" nods to the STONES and the FACES, acoustic guitars buzzing away in a haze of stoner soul.

If you want something heavy, thousands of other bands can sort you out. But if you need something bright-eyed and breezy to soundtrack a quick trip to the beach, either real or imagined, this is as pure a dose of skinny-ass rock 'n' roll as any chill-seeker could wish for.