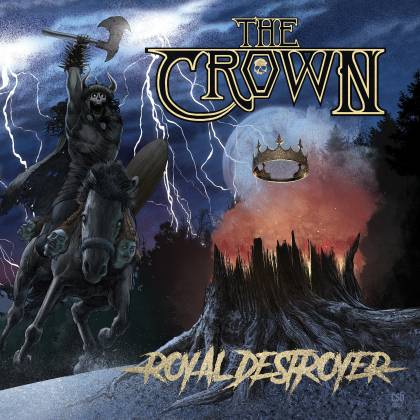 As other bands from the 1990's Swedish death metal scene wandered into the abyss of exploration and mostly failed (with few ever capably recapturing the sparks of their initial fury),THE CROWN have managed to remain one of the most reliable bands in the entire genre. While the days of them generating all-time genre classics like 2000's "Deathrace King" are long gone, there is still comfort to be found from the band's ability to maintain a remarkably consistent streak of excellent Swedish death metal. Even as the band weathered one breakup and multiple lineup changes throughout its run, they have somehow managed to not release a record that was less than very good. Their latest record, "Royal Destroyer", is once again not an AOTY candidate, but it is still worth multiple listening sessions simply being another in the lengthy line of reliably good records generated by this outfit.

THE CROWN figured out what they want to do with their sound long ago, and they have become masters of that sound's every aspect. All corners of the Swedish death metal sound that still capture listeners thirty years after the peaks of the genre are present. If you're a fan of fast-paced buzz-saw riffs, furious solos loaded with shred and blastbeats, all of those abound on "Royal Destroyer". The group's first album in three years launches with a furious 79-second blast of grindcore-laden death where all of these are packed into the short running time. "Baptized in Violence" explodes with pent-up energy bursting out all at once in an attempt to recenter at a true launching point. This energy continues for the first half of "Let the Hammering Begin!", a sprawling six-minute journey through the ferocity we love from the heavier side of the melodeath spectrum, which manages to keep up during some of the slower mid-tempo breakdowns in the middle of the track. If your taste in Scandinavian metal leans towards the rippers, THE CROWN also generates that strong level of energy on "Full Metal Justice" and "Scandinavian Satan".

The band still also shows that they are adept at keeping an air of ominous heaviness when it's time to slow down and indulge in a mid-tempo stomp. "Glorious Hades" is a catchy crusher showing that Johan Lindstrand's barks are as fierce as ever, with a lead solo from guitarist Robin Sörqvist reinforming why he has remained in that position since joining THE CROWN for 2015's "Death Is Not Dead". "Devoid of Light" showcases the perfect mix of the band's more furious impulses and their more restrained mid-tempo crunch. The only real departure track comes during the first half of the record, as "Ultra Faust" has a bit of groove-metal indulgence that would seem more at home on the heavier side of the MACHINE HEAD catalog, though Lindstrand's vocals and the band's expertise at executing a darker atmosphere keep it from feeling too detached from the remainder of the record.

THE CROWN have long been adept at timing all of the beats that an excellent melodic death metal record should hit during its running time. "Royal Destroyer" is another strong effort that shows the band still being very capable of hitting them.