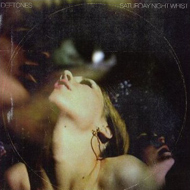 No one could ever accuse DEFTONES of not being a truly weird bunch of guys: just listen to "Pink Cellphone", from the band's fifth album, "Saturday Night Wrist", to hear the group at their absolute strangest. In fact, the band fades into the background on this track: it's an ambient collage of loops played under a sexy female voice (provided by GIANT DRAG's Annie Hardy) reciting some bizarre stream-of-consciousness patter that unexpectedly turns quite obscene.

But the DEFTONES are usually at their best when they are at their most experimental, which is why 2000's "White Pony" remains their finest outing to date. 2003's self-titled fourth effort sounded dreary and repetitive, as if the band itself had tired of its sound.

On "Saturday Night Wrist", the distinctive DEFTONES sound is still there — and still remains a decidedly acquired taste — but the sense of eclecticism and experimentation is back, as well as a newfound energy. The album's heavy cuts are among the heaviest the band has done, while the more diverse stuff breaks up the disc enough for those of us who sometimes find these Sacramento boys droning and inaccessible. Even if one is not the world's biggest DEFTONES fans, there's a wide range of styles available here to keep the album interesting.

The riffing from Stephen Carpenter on cuts like the surprisingly catchy "Hole In The Earth", "FM" and "Beware" is huge and brutal at times, with the latter tune starting out slowly and more atmospherically before Carpenter cuts loose in the track's final section. The next two songs on the record, "Cherry Waves" and "Mein", are more generic, with the latter only set apart by an appearance by SYSTEM OF A DOWN's Serj Tankian. The most abstract section of the album follows, as the ambient instrumental "U, U, D, D, L, R, L, R, A, B, Select, Start" leads into the mellower, strangely moving "Xerces". Singer Chino Moreno, whose wistful vocals have always been a love/hate proposition, seems to inject real emotion and presence into this and other songs on the disc, giving his performances here a more forceful quality that before.

Much of "Saturday Night Wrist" — at least judging by Moreno's deliberately inscrutable lyrics — seems to have been fueled by the band's well-documented difficulties in making this album, problems which came close to breaking the quintet up (check out the lyrics to the ferociously manic "Rats! Rats! Rats!", "Combat" and "Hole In The Earth" and you'll get the picture). Yet in the tradition of many rock bands who have used crises as a springboard for their art, DEFTONES have rallied to create one of the strongest discs in the band's repetoire. As much as I liked "White Pony", that's pretty much the only DEFTONES CD I've ever listened to more than once — until now. If you're not a fan, this one could change your mind. If you're already one, then you'd better hope it doesn't take the group's near-destruction to produce another album this strong.