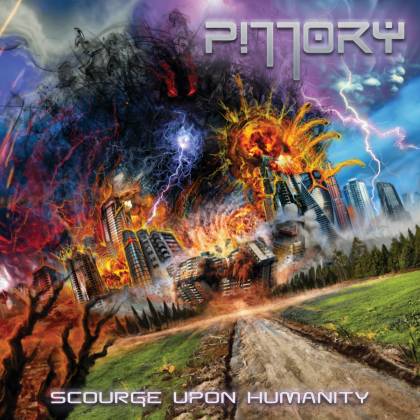 Not just a current member of both DEEDS OF FLESH and GORATORY, Darren Cesca might not be a household name, but his contribution to modern death metal is unquestionable. This is only Cesca's third album under the PILLORY name, arriving six years after the widely acclaimed (in underground circles, at least) "Evolutionary Miscarriage" and a startling 15 years since 2005's "No Lifeguard at the Gene Pool" debut. Clearly the Bostonite's instinct to make music alone only registers intermittently, but if the results are as murderous and ingenious as "Scourge upon Humanity", fans of ultra-techy savagery certainly shouldn't grumble.

There are plenty of one-man death metal units out there in the grubby shadows, but few of them have the sheer audacity that Cesca exhibits throughout his third full-length. PILLORY seem to represent a gleeful maxing-out of technical death metal's lust for modernity, with a precise and slightly clinical sound that makes every kick-drum and growl impact with cold, robotic power. The key to this album's allure lies in the wild, forward-thinking structures and arrangements of the songs themselves. There are countless bewildering moments wherein several strands of extremity seem to be erupting simultaneously, not least during the album's shorter, more intense songs, like "Imminent Obliteration". Lurking at some nebulous midpoint between ORIGIN's all-out tech-grind, the synapse-blitzing wonkiness of CEPHALIC CARNAGE and the more artful and progressive hues of OBSCURA and PSYCROPTIC, Cesca's highly detailed yet eminently groovy approach is subtly but unmistakably original.

The 11-minute "Emanate Deprecation" is a particularly mind-blowing example of the multi-instrumentalist's maniacal creativity: with more killer riffs than seems strictly fair, it twists and turns with maniacal abandon, sometimes defying logic with some implausible detour, before snapping back into a burst of war-hungry old-school aggression. Many bands would have squeezed at least four songs out of the surfeit of ideas PILLORY unleash during that one epic, but "Scourge upon Humanity" is definitely a "more is more" kind of record. It's also, at heart, a balls-out death metal record, with plenty of the macabre money shots that diehards demand. Closer "Terminus" is particularly satisfying, with its seamless tempo shifts, polyrhythmic asides and mid-song descent into dark ambient hell.

Whether through instinct or good fortune, PILLORY are bringing this wretched year to a close with the sound of death metal being dragged into a very idiosyncratic and unfamiliar future. With, as you may well demand, added slams and a dash of abstract noise. Happy Holidays.