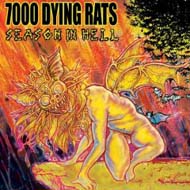 Hopped up on high-octane coffee, high on the herb, drunk on Wild Turkey, shuffling on Thorazine, you can take your pick as each will provide a state of mind at some point during the 28 tracks of grindcore and musical lunacy on 7000 DYING RATS' "Season in Hell". After a relatively long wait, the Detroit/Chicago collective, which counts in its membership Steve Rathbone (LAIR OF THE MINOTAUR) with his demon-toned riffs, unleash another bone-jarring and mind-fucking amalgam of grinding disorientation and compositional schizophrenia.

When the boys go for grind they grind with the best of 'em, bashing with abandon. Sometimes said grind is more of a knurled churn, at others a speedball of sonic dementia. And then there are all those other ingredients that give the album its wildly disconcerting aura. Violins scrape the eardrums and keyboards create cosmic chaos. Christ, there is even a loony hip-hop (the faux white boy kind) called "We Want Weez-E". A seemingly heartfelt, yet fully indicting "ballad" called "Your Studied Indifference is Duly Noted" gets thrown into the pit with cock rocker "Rock n Roll Weapon". One must not forget about a techno (with country picking section) version of BLACK SABBATH's "Paranoid" or the raucus 'n' raw (and presumably live) versions of JOURNEY's "Any Way You Want It" and JUDAS PRIEST's "Living After Midnight", both contained on a track called "Hellcatcher". NEUROSIS' Scott Kelly even gets into the act on "A Real Kneeslapper". How about this one for song title of the year: "We Had 'Dying' in our Name Way Before all those Metalcore Cocksuckers came along". It's bedlam I tell ya!

So it's not for everyone and the rat patrol wouldn't have it any other way. This thrown-into-a-blender style may no longer be revolutionary, but it sure as hell leaves an impression (as in dents in the skull and bloody stomach ulcers). Look for "Season in Hell" to be released as the soundtrack for the next IMMA (Independent Meth Manufacturers of America) convention.