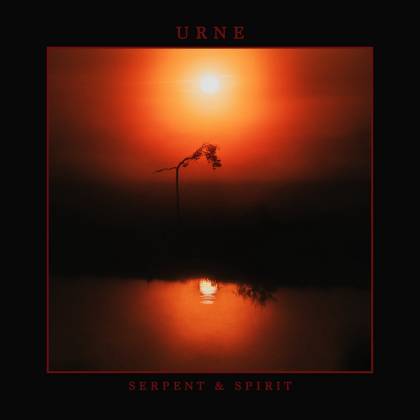 There is no point in obfuscating and building up to it with a meandering preamble: URNE are seriously special, and this is an absolutely monstrous debut album on every conceivable level. Music critics tend not to hurl their temporary secrets into the air with quite that much abandon, but "Serpent & Spirit" is the kind of heavy metal record that will completely restore your faith in the modern era's ability to produce greatness. Crushingly heavy and redolent of all kinds of fantastic things, while always much greater and more compelling than the sum of those parts, URNE's first full-length should feature in a lot of end-of-year lists and, as word spreads, they must surely be destined for big things. No, I'm not crying. You're crying.

Blazing majestically away at the heart of this 54-minute revelation is the sound and spirit of the most classic heavy metal imaginable. The opening title track fades in with a glorious wash of twin-lead grandeur, evoking all the obvious proponents of that fine art, but the essence of METALLICA's "…And Justice For All" in particular. As the full band kicks in, it's instantly obvious that URNE have forged a new hybrid here, but without any of the self-consciousness that usually goes with it. As the first full-on metal riff kicks in, this trio sound like an army thundering over some blistered horizon. As the song sprawls on, it's a perfect storm of thrash metal grit, post-metal muscle and progressive flair, with elegant melodic interjections and an ever-mounting sense of brutal power. It's epic, impressive and emotionally supercharged in a way that the vast majority of so-called modern metal generally isn't.

A more succinct five-minute assault, "The Palace of Devils and Wolves" is built around an unashamedly straightforward riff, but one delivered with such ferocity that resistance is useless. Again, the song is a carnival of smart ideas, from bendy ALICE IN CHAINS riffs to a gnarly chorus that wouldn't be out of place on an INTEGRITY record, with a final descent to mega-riff heaven that practically guarantees spinal issues for all involved.

Two songs in, and "Serpent & Spirit" already feels like one of the albums of the year, but debut records are rarely flawless and cynics might be expecting a downturn. There isn't one. From the opulent, MAIDEN-tinged "Memorial" to the grim, deathly stampede of the closing "A Tomb So Frail", URNE have packed a ridiculous amount into every song, but always retaining a sense of momentum and fluidity. These are brilliantly crafted songs, immaculate prog epics and bruising, bone-powdering onslaughts, all at the same time. Just dive into the punishing monolith of "Desolate Heart": quite possibly the album's creative and emotive peak. With an authority that comes from knowing exactly where their strengths lie, URNE deliver each of the song's numerous dynamic surprises with eerie finesse, with vocalist (and bassist) Joe Nally audibly feeling the music's power flow through him. It's a magical moment, but on an album entirely constructed from them. Audacious.

And did I mention the riffs? You may well infer the use of witchcraft during "Serpent & Spirit" because URNE have so many great riffs that even without all the beautiful melodies, swathes of tangible melancholy, deep dives into brutality and wide-eyed, progressive conceits, this record would be a solid contender for debut of the year. With all of that included, it's a decent contender for debut of the decade so far. Again you're crying.