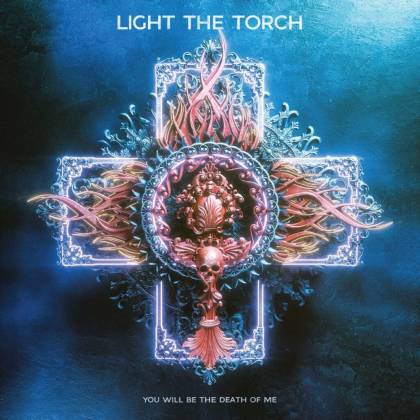 You Will Be The Death Of Me

Seldom has a name change made such a difference. Howard Jones (ex-KILLSWITCH ENGAGE) re-emerged from a five-year hiatus to unveil THE DEVIL YOU KNOW's 2014 debut album "The Beauty of Destruction", and sensible folk rejoiced, not least because one of the few truly great voices of metal's post-millennial surge was back and sounding better than ever. In truth, however, neither that record nor its solid follow-up (2015's "They Bleed Red") seemed to make best use of the Ohio man's talents. Everything finally clicked when the band became LIGHT THE TORCH, seemingly inspired by a shift in musical direction. Gone were the trappings of metalcore and other 21st century metallic fads, replaced by exactly the kind of huge, memorable metal songs to which Jones's voice is so gloriously suited. The redubbed crew's debut, "Revival", was an absolute joy, as guitarist Francesco Artusato's endless supply of catchy but crushing riffs underpinned the former KILLSWITCH ENGAGE frontman's finest vocal performance yet. No wheels were being reinvented, of course, but it was undeniably great to hear Jones soar.

Three years on, LIGHT THE TORCH have refined their traditional but oddly timeless sound a little more, and "You Will Be the Death of Me" is even more direct, succinct and designed to stir the soul. More importantly, every last one of these 11 songs wields a hook so huge you could snag Cthulhu with it. Lithe and momentous, opener "More Than Dreaming" slams down the band's super-melodic agenda in a straightforward manner, but it's the grandiose squall of "Let Me Fall Apart" that brashly highlights the big step forward happening here. There's an imperious sheen to the state-of-the-art production that has more in common with WITHIN TEMPTATION or PARADISE LOST than any post-KILLSWITCH fare, and Jones's melodies and impassioned delivery are very much big enough to match their magnificent surroundings. No, you've got something in your eye.

"You Will Be the Death of Me" rumbles on relentlessly, giant tunes falling from the heavens and every riff connecting like it should. There are plenty of immediate standouts, from the brooding, low-slung swagger of "End of the World" to the futuristic blitzkrieg of "Living With a Ghost", wherein Jones lets rip with some boss-level screams before a gleaming mini-symphony breaks out in sympathy. But this is an album with no low points, no weak songs or anything resembling a half-baked idea. It's not an exercise in fiendish ingenuity, either, but LIGHT THE TORCH have discovered that what they do best is write colossal, singalong anthems, and Howard Jones has never sounded so well-equipped to smash each one out of the metaphorical arena.

It ends with one of the most disarming cover versions imaginable. Readers of a certain age will doubtless recall TERENCE TRENT D'ARBY's "Sign Your Name", and wherever one stands on the pros and cons of the late '80s pop-soul maverick, LIGHT THE TORCH's reading of his song is a magnificent thing and, unexpectedly, genuinely moving. As ever, it's Jones's voice that pins your heart to the wall, and he does that throughout this wonderfully unassuming but ferociously sharp and sincere piece of work.