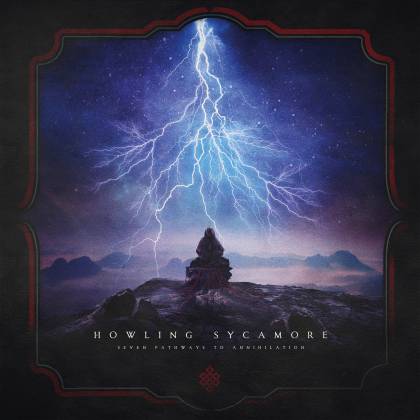 It was always going to be epic. Take one of the most inventive and quite possibly unhinged songwriters in extreme music history, Davide Tiso (EPHEL DUATH),and pair him with one of the greatest metal voices of all time, Jason McMaster (WATCHTOWER),and then, why the fuck not, get Hannes Grossmann (HATE ETERNAL, BLOTTED SCIENCE, ALKALOID, OBSCURA, ex-NECROPHAGIST... yes, it's quite a list!) in to play drums, and you genuinely couldn't have gone too far wrong, alien invasions or debilitating drug habits notwithstanding. And so, it proved, of course: the first HOWLING SYCAMORE album was arguably an expected revelation, but the music itself was so ingenious and thrillingly unfamiliar that expectations were still somehow exceeded. Obviously, we're dealing with a fervently left-of-center and non-mainstream band here, so it's hard to imagine that Tiso and his comrades have been under great pressure to produce a more straightforward, catchy follow-up. But even with the trio's compositional perversity assumed, this is a frequently jaw-dropping metal record, full of drama and dynamics, but equally focused on whipping the sonic rug from under our feet.

If you're anything like me, you could happily listen to Jason McMaster sing any old nonsense. Here he sounds more commanding and versatile than ever before, and Tiso is proving to be his perfect foil. Opening track "Mastering Fire" crams in an absurd number of musical ideas, almost encapsulating the entirety of the debut album's scattershot assets across eight minutes of sustained madness. "Departure" is a darker, melancholier affair, and it's here that McMaster 's vocal muscles start to flex. He soars across the octaves while Tiso and Grossmann whip up a bewildering, schizophrenic storm of tempos and moods beneath him. "Initiation" is a monolithic, doomy sprawl, underpinned by dirty, death metal slurry, prone to sudden detours into high-speed trickery. Again, McMaster is the sturdiest of focal points, switching from gritty croon to incensed yelp with laudable finesse. He sounds emboldened in this deeply progressive context, slotting seamlessly into perfect holes in his partners' multi-layered cacophony and surfing over the blastbeats with a physician's skill.

Next, "Second Sight" is like some skewed, darkside DIO ballad that continually collapses in on itself; fluid but chaotic, McMaster's melodies and warped narrative provide a linear thread to the finish line. A sumptuous lead break from Marty Friedman is a welcome touch. "Raw Bones" is all tense grooves and blackened discord, with a thunderous and very metal mid-section that lurches like GOJIRA before McMaster re-appears, letting rip with that astonishing top range. "Tempest's Chant" contains some of the album's most blissful melodic moments, but also some of its weirdest and most extreme. Just as you're catching your breath, grand finale, "Sorcerer", brings the album to a monumental close with an immersive prog metal symphony, replete with explosive but elegant saxophone solos from YAKUZA's Bruce Lamont.

You can't fake chemistry. Tiso, McMaster and Grossmann have the real thing in obscene quantities, and you can almost hear the shared creative satisfaction oozing from this brave, challenging and absolutely barking mad music. Long may this meeting of liberated metal minds continue.