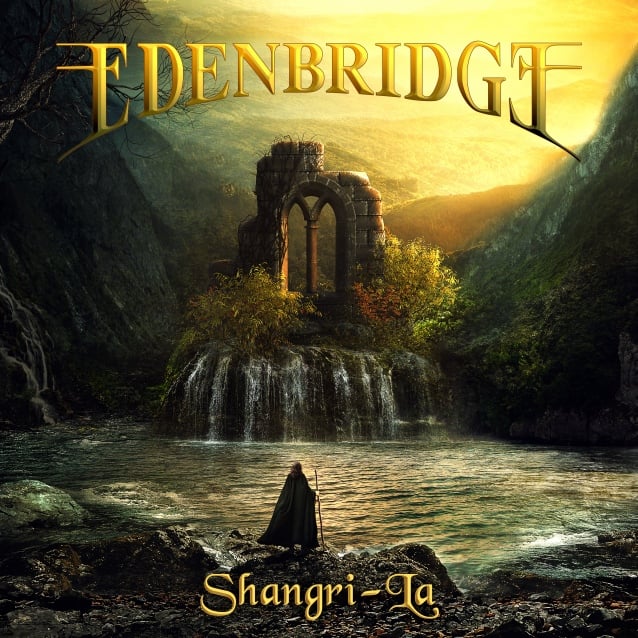 An established fixture of the symphonic metal scene in Europe and proven veterans with a sturdy back catalogue, EDENBRIDGE may not have made much impact on the wider metal world, but there has never been any question of their ambition. "Shangri-La" is the Austrians' first album for a new label, and while there is little here to scare the symphonic horses, there are numerous moments that indicate a desire to refresh and evolve.

With ten studio records in the bank, EDENBRIDGE have little to prove in terms of hitting symphonic metal's sweet spot. The drawback to their trademark sound is that it rarely strays from the beaten path, and despite the occasional progressive splurge, previous albums have always been variations on roughly the same musical themes. Their eleventh album is arguably no different, and yet these songs do have a certain charm that elevates them above past efforts.

Opening epic "At First Light" is as opulent as its eight-minute running time demands, with vocalist Sabine Edelsbacher scaling the octaves with her usual mastery of both pop-metal directness and operatic indulgence. On an entirely different tip, "Somewhere Else But Here" is a simply glorious, straight-ahead '80s metal rager, with a blinding AOR sheen and some wonderful soloing from founding guitarist Arne "Lanvall" Stockhammer. A possible contender for most preposterous song title of the year, "Freedom Is A Roof Made Of Stars" is almost purely prog in intent, with orchestral interjections adding oomph to the drama, and sparkling, melodic rock harmonies. Once again, Edelsbacher's vocal is otherworldly.

The bold detours continue through the delicate sweep of dark ballad "Arcadia (The Great Escape)" and the progressive power metal rush of "The Road To Shangri-La", but it is undoubtedly the closing monolith of "The Bonding (Pt. 2)" that diehard fans will be slavering over. A sequel to EDENBRIDGE's 2013 album of the same name, it's a 16-minute tour de force that swiftly outstrips any of the band's previous epics, batting all those lazy NIGHTWISH comparisons away in the process. Infused with the spirit of progressive rock's radical first wave, but as slick, glossy and modern as their chosen genre demands, "The Bonding (Pt. 2)" is worth the price of admission alone.

Overall, "Shangri-La" is easily this band's strongest record since "The Bonding" and bodes extremely well for an even more adventurous future. Highly recommended, even for the merely symph-curious.