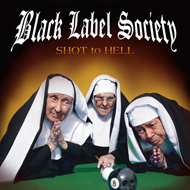 Talk about a prolific writer! Guitar god Zakk Wylde kicks out albums like rabbits produce offspring. On BLACK LABEL SOCIETY's "Shot to Hell" (Zakk's eighth),the only real surprise is a more varied mix of material, that being the traditional Zakk hard ass riff-n-squeal rockers along with several mellow, piano-based ballads. BLS has a gritty, street tough style that resonates with Chapter members the world over and, quite frankly, the collective ears of the global populace can always stand to hear more gritty and beer-soaked hard rock and metal. And Wylde, guitarist Nick Catanese, bassist John DeServio, and drummer Craig Nunenmacher are more than happy to meet that need with shredding guitar, glass-shattering volume, and good old fashioned "songs" that don't require a musicologist to decipher.

As to the album's heavy material, most of the songs are the kind with which you are already familiar. "Concrete Jungle", "Faith is Blind", "Black Mass Reverends", "Give Yourself to Me", and "Blacked Out World" are darkened, mid-tempo rolling jams that are fueled by molten licks, a steady beat, and Wylde's distinctive singing style. Vocally, Wylde does stretch just a little, if only to add accent and a different flow to certain songs. Arrangement-wise, the "formula" is shook up a tad on a handful of tracks. "Hell is High" mixes in light and melodic parts, the BLS thump of "New Religion" includes a beautiful opening piano section, and "Blood is Thicker than Water" is propelled by a clean rhythm guitar part, lighter singing, and a breezy groove.

The album's ballads are predictable, but solid, and very heartfelt. "Lead me to Your Door", "The Last Goodbye", and "Nothing's the Same" are classy and melancholy tracks that may not be radio smashes, but work quite well within the album's overall framework. The female backing vocals on "Sick of it All" are a nice touch and give off a slight southern rock vibe. The effect of Wylde's soloing leaping out of the serene mixes tends to have a spellbinding effect.

In the final analysis, "Shot to Hell" will not cause BLS to lose fans, even with the abundance of ballads this time around. In fact, it is easier to listen to "Shot to Hell" in one sitting because of the song variety. If you're a BLS fan, "Shot to Hell" is probably more of what you expect with just a hint of progression.