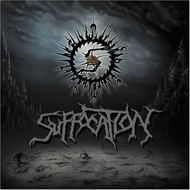 American death metal's most consistent and punishing standard-bearers, SUFFOCATION sometimes get overlooked in the rush to deify other bands. While it could be argued that they've never been a particularly innovative act, there's something to be said for the songcraft, torturous bits of melody, and impressive use of guitar hooks and thrash tempos that make old songs like "Liege of Inveracity" and "Pierced From Within" still slay today. There's also the undeniable fact that, as the sum of their individual parts, SUFFOCATION boasts some of the best and most underrated players in death metal, all hammering on these songs with balls-out conviction.

Drummer Mike Smith alone makes the band capable of leaving welts on the skin of unsuspecting listeners. His hard-hitting blasts send a nation of trigger-packing skinsmen home weeping in shame, while his tasteful fills and accents always work in service of the song. Frank Mullen has evolved from the early mic-cupping days that influenced a generation of death metal growlers, but his oddball lyrics and forceful, clear delivery are perfect for the band as it is today.

Arguably the best thing going for SUFFOCATION, though, is the guitarwork of Terrance Hobbs and Guy Marchais. In a genre often marked by indistinct chaos in the axe department, Hobbs and Marchais inject a classy, semi-technical, clinical precision into their playing, toying with harmonies and charred bits of melody even in the middle of flaying blast beats and pummeling breakdowns. Listen to the last minute of riffing in "Bind Torture Kill" — immediately after a divebombing whammy-bar solo, there are these triplets, a slow and almost regal section that ends the song on a powerful, majestic note.

Don't let all this talk of control and class fool you, though — SUFFOCATION remains one of the meanest, heaviest, most undiluted and brutal death metal bands on this continent. If you're looking for a quick example, check out "Misconceived" — just over three minutes of intense, thrashing, blasting punishment. It leads into "Translucent Patterns of Delirium", one of the more winding and twisting tracks on the album — slithering from a slow, brooding opening to manic blasts with wild-eyed riffing creating an atmosphere of instability (Smith in particular changing gears at just the right moments to make the song that much more neurotic and unbalanced). SUFFOCATION don't make long songs, or albums, because they don't have to — they can cram more intensity and crafty writing into forty-odd minutes than most bands can manage in a career.

Most American death metal painted itself into a corner years ago, but SUFFOCATION, through musicality, inventiveness, and sheer conviction, have found a hundred little ways to push the envelope and inject personality into its reeking cadaver. "Suffocation", the album, is a multi-dimensional death metal feast that never forgets its primary mission to beat the listener into submission.