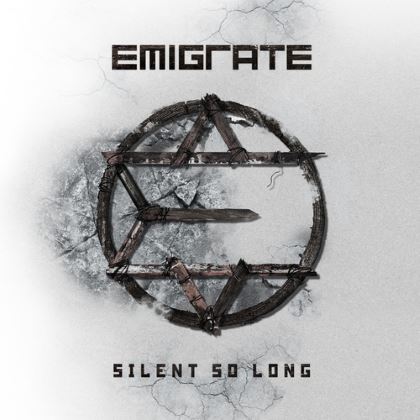 RAMMSTEIN guitarist Richard Kruspe is back with the second album under his side project, EMIGRATE, following the 2007 self-titled debut. As one of the tightest bands in the world, any RAMMSTEIN release is bound to gather a lot of attention. "Silent So Long" should draw a lot of followers, not just because of RAMMSTEIN, but because it features cameos from Marilyn Manson, MOTÖRHEAD's Lemmy Kilmister, Jonathan Davis of KORN, Frank Delle from German horn ensemble SEEED and Canada-to-Germany diva plant Peaches.

Better yet, Kruspe and his EMIGRATE players (including guitarist/producer Olson Involtini, bassist Arnaud Giroux and drummers Mikko Sirén and Joe Letz) throw out eleven English-sung tracks, all but one (the exception being the slow cooker "Born on My Own") filled with popping energy. While the first EMIGRATE album was full of curious and often cool ideas, "Silent So Long" is a focused, bouncing album with just enough pulls from and away RAMMSTEIN to give this band its own identity.

"Eat You Alive" is one the better album openers you'll hear this year. It carries an invigorating pump, strident riffs and well-stacked choruses from Kruspe, who spills a minor rasp into this cut, slightly jacking his otherwise brimming cleans. Frank Delle's loony throat wriggles actually makes "Eat You Alive" even more exciting. The electro pulse shoving the dance rocker "Get Down" is both bred from KRAFTWERK and Prince with its fortifying digi groove and funky guitar lines for much of the ride. Kruspe hammers down the track with a booming finale and his shrill guitar solos are about the only dirty spots on this smartly delivered bobber.

Playing to a double-hammered path on the adrenalized "Rock City", Lemmy Kilmister ralphs and croons to a blazing tempo that readily fits him even with the digital shakes and electronics swirling about the base velocity. Richard Kruspe writes a soothing bridge in the middle of this song that defies logic, but it works as magically as Lemmy's walk-on.

For any direct sound connections to RAMMSTEIN, the main riffs of "Hypothetical" are borrowed from the latter's "Mein Herz Brent", while slinking along with more shimmy than brute force. Like Lemmy and "Rock City", Kruspe matches the groove of "Hypothetical" to suit Marilyn Manson's glam-crunk shakes. Though "Rainbow" is pure rock in nature, there are subliminal hoists of riffs and electro patter from RAMMSTEIN, yet Kruspe differentiates EMIGRATE's material by kicking this song with a footloose pound that allows for more snare rolls and surfing keys. The banging "My Pleasure" and the sultry slinker "Happy Times" could hang on a RAMMSTEIN album and take your pick who should sing them: Kruspe or Till Lindemann. These songs rock hard enough for either man to sock them out.

The tough strides of "Giving Up" hardly does that. The song, like most of this album, cooks with serious heat. In this case, the dialed-back strut allows for a harder beat and nastier riffs to guide the swimming keys. Richard Kruspe snarls and bucks the song's title with stout bravado. Even with a slower, electro-swept tempo guiding the title track, the groove is so thick it guides the song toward its moody choruses where Kruspe and Jonathan Davis merge together terrifically. The song spikes with blaring guitars where appropriate and crescendos with a full rock kick, wrapping the album on as much of a high as it began with.

Like RAMMSTEIN, Richard Kruspe and EMIGRATE play tight to the hip and in this case, the songs hum usually within four minutes (minus the 4:50 running time of "Born On My Own"). What was hinted at with the first EMIGRATE album is a huge step forward with "Silent So Long". While we wait for a new RAMMSTEIN album to manifest, this is a fantastic tide over.