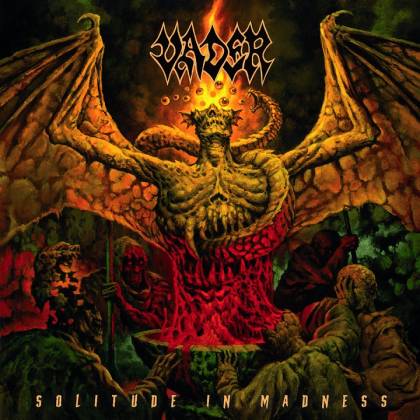 Extreme metal is supposed to get the blood pumping. It should make you feel ten-feet tall and bulletproof. It might even make you drive in a reckless manner from time to time. These are the rules. Don't shoot the messenger.

The problem comes when you spend a large chunk of every day listening to brutal, fast-paced music. After enjoying many years of the stuff, it becomes increasingly hard to recreate the original, adrenalin-fueled rush you felt when you first heard, for instance, SLAYER's "Reign In Blood". That's what many of us extremity obsessives are constantly chasing and that's exactly what VADER provide on their 12th studio album. There may be plenty of faster and heavier records out there, but "Solitude in Madness" hits that sweet spot where vicious muscularity and controlled chaos collide. It's one wild, sustained eruption of aggression and technical prowess: 30 minutes of pure, infernal death metal, delivered by bug-eyed zealots with an armory of axes to grind. It rips so hard, listeners may need to stitch their faces back together. Thank Satan, you may find yourself saying, for VADER.

It starts as it intends to go on, too. "Solitude in Madness" explodes from moment one, as excoriating opener "Shock And Awe" delivers some instant, pummeling justice. VADER have long been masters of the short, sharp burst of deathly intensity, but they've really nailed the formula here, and it makes the band stand out from their peers more than ever. "Into Oblivion", "Final Declaration", "Stigma Of Divinity" — they're all wickedly succinct and devastating, done and dusted around the two-minute mark and yet still brimming with killer riffs, gnarly hooks and some of the most exhilarating ensemble precision you'll hear this year. Once again, drummer James Stewart is the power behind founder and frontman Piotr Wiwczarek's throne: if you want to hear what peak death metal drumming sounds like, just check out his absurdly furious and powerful performance on 78-second face-flayer "Despair". Again, there are undoubtedly faster bands around, but few that can make your ribs rattle like this.

In truth, there's not much else to say about an album that slays as hard and relentlessly as "Solitude in Madness". VADER have been so consistent over the years that it would be easy to dismiss this as more of the same from a reliable source of great music, but this one's a bit special. It demands your attention, smashes everything in sight and then vanishes, leaving you to return your jaw to its usual position. Drive carefully, folks.