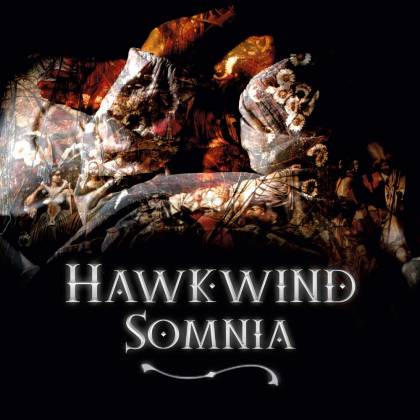 Half a century into their career and legendary space rockers HAWKWIND's ground-breaking, experimental madness has provided immeasurable influence on heavy progressive music. Since day one, they've contributed to the world of music by taking a left-field approach, allowing themselves to creatively wander along their path, all the while remaining on a consistent and logical trajectory while never betraying their core sound and essence. Numerous notable musicians have had stints with the English band, including CREAM drummer Ginger Baker and Lemmy, the latter of whom was ousted following a Canadian/American border drug-related arrest. But HAWKWIND's true heart and soul has always been its only remaining original member, frontman Dave Brock. Although at 80 he's deep into his Golden Years, he shows no signs of slowing down. Instead, Brock and company are forging onward with their 34th (!!!) album: "Somnia", a release that is bound to satisfy longtime devotees.

This go around, Brock leads the march with a thematic focal point that's even more bizarre than the act's tried-and-true focus upon space. "Somnia" is a voyage into the realm of sleep, and the 13 tracks therein are just as numbing and sedative as they are invigorating and titillating.

Opening number "Unsomnia" begins with comforting, beautiful space rock sounds that morph toward ones that are appealing and stimulating while being paradoxically unsettling at the same time. As the song progresses, the instrumentation winds through significantly more disturbing passages. Much later in the release, "Barkus"'s guitar melodies are the album's only windows into a more purely uplifting and bright emotional landscape. It's not that the energy of "Somnia" is overbearingly oppressive, but it certainly is the case that "Somnia"'s dreaming voyage is more inclined toward a nightmarish experience.

Sticking with the HAWKWIND standard, the songs entail periodic hard rocking sections that are injected into the layered, synth-heavy ambience. True to "Somnia"'s conceptual basis, the approach mirrors the nature of how we dream — the way that we feel surreal, otherworldly experiences that are sometimes abruptly or fluidly interrupted by ideas and feelings more germane to real life. "Somnia" is one of the most intriguing and captivating albums that HAWKWIND has released in years. The hard-hitting portions aren't as frequent or robust as they once were, but it's appropriate to the album's concept and makes sense considering Brock's age.

The relative beauty and clear production lend toward "Somnia" being one of the most accessible releases of HAWKWIND's career. Yet "Somnia" is just as unconventional as HAWKWIND has always been compared to most of the new music that's out there, and the band continues to be just as enthralling as they ever were. No small feat for a band that's been around for over 50 years.