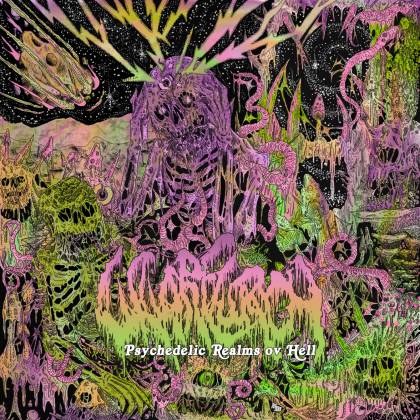 Despite what you may have heard, old-school death metal never went away. But what a new generation is increasingly discovering is that there are subtly new ways to evoke the sound of a crushing avalanche of blood, guts and existential dread. The most adventurous of these bands are taking the hallucinogenic cosmic death route, and WHARFLURCH are immediately identifiable as among the best of that malevolent group.

"Psychedelic Realms Ov Hell" does exactly as promised, dragging death metal down into some vile, swampy hinterland where the rules of physics no longer apply and comprehension is measured in units of psilocybin. Rooted in doomy tempos and the gutter-level sludge of the terminally de-tuned, every one of these six paeans to bog-sucking oblivion conjures perverse mental images and the pungent stench of supernatural dread. But there's more to the skull-shattering likes of "Stoned Ape Apocalypse" and "Bog Body Boletus" than pithy song titles and an oppressive stampede of caveman riffs: WHARFLURCH pepper their cacophony with eerie synths and the skewed sonic trappings of cinematic horror, leading to an even greater sense that these miscreants are drinking from some terrible well of lysergic devilry.

For those looking for more mind-bending post-death experimentation in a BLOOD INCANTATION or VOIDCEREMONY vein, WHARFLURCH certainly exhibit a similar desire to distort and confound, but "Psychedelic Realms Ov Hell" is no slave to progress. Instead, the Floridian crew have struck upon the ideal combination of lobotomized brutality and acid-fried exploration. "Abandoning Reality" is the most effective demonstration of their mischievous instincts: a largely straightforward death metal song, it pounds and pummels like the scabbed fists of some psychotic but uncomprehending mutant oppressor, before veering off on a synapse-tweaking prog-death detour with guitars panning wildly from speaker to speaker. Similarly, the closing title track is so gloriously whacked-out and unhinged that it would be easy to miss the visceral excellence of WHARFLURCH's riffs and the deliciously old-school attack that underpins them. There is method in the madness, and the madness is real. For those who cheered when death metal got weird, this is another mandatory trip to the brain.