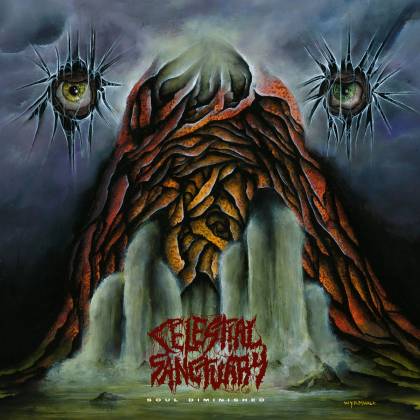 A self-proclaimed part of a nascent but hugely promising New Wave Of British Death Metal, CELESTIAL SANCTUARY are instantly recognizable as the real deal. Everything about "Soul Diminished" is bang on the old-school money. From a production that combines the muscular impact of modernity with plenty of raw clangor, to perfectly conceived riffs that evoke the unique stench of AUTOPSY and BOLT THROWER without ever sounding directly derivative, this comes closer to sounding like some lost classic from the early '90s than any comparable album in recent memory.

Ultimately, you can't fake this kind of true-to-the-bone brutality: CELESTIAL SANCTUARY have that all-important swagger and swing that is so often polished away from modern death metal by technology. Songs like "Rid The Gormless" and "Relentless Savagery" are undeniably vicious and intense, but there's much morbid feel and intuitive grooviness in evidence, too. The slow, menacing riffs that underpin large parts of "Wretched Habits" owe as much to VENOM as they do to OBITUARY, and there's a palpable sense that this band have arrived at this sound through instinct rather than calculation. The hybrid is a seamless one and has such strong echoes of death metal's glorious first and second waves that, once again and in the best possible way, this could easily have been released in 1992.

As with many of the finest death metal bands, CELESTIAL SANCTUARY understand that slow is nearly always heavier than fast: both "Suffer Your Sentience" and "Yearn For The Rot" boast riffs straight from the SABBATH-ian wellspring, but fed through the last 30 years of suppurating underground filth. Frontman Thomas Cronin has a voice that rolls back the decades, too. His voice is part Jeff Becerra rasp, part Karl Willetts bellow, it's another major contributor to this album's mesmerizing air of authenticity. On the succinct but brilliantly grim "Mass Extinction", you can almost hear his eyes roll back into his skull, lost in death's reverie.

Not that "Soul Diminished" is a po-faced paean to the past. CELESTIAL SANCTUARY have somehow harnessed the feral energy of death metal's early days and written some freshly foul anthems to further honor that spirit. If you were being cynical, you might say that this is an exercise in nostalgia. But the truth is that death metal's ageless allure simply gets passed down like some ancient, bloody baton, and right now, CELESTIAL SANCTUARY are wielding it with the kind of skill, power and panache that once elevated the music of the ancient gods. Splendid work, chaps.