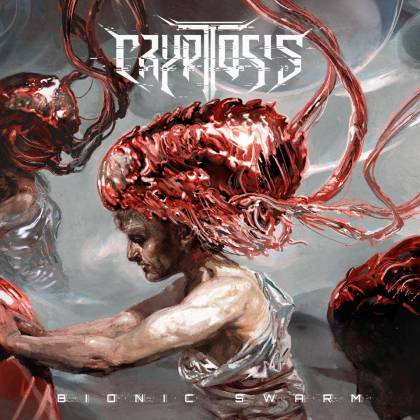 Biting the bullet and doing what feels right is arguably the key to most great music. CRYPTOSIS are living proof: the Dutch trio were originally known as DISTILLATOR and released two albums of top-notch old-school thrash before deciding, perfectly reasonably, that a change of approach was in order. The result is a new band, a new sound and a debut album that absolutely will take your face off and toss it into the nearest pile of smoking space debris. Not just a reinvention, but a genuine blast of something thrillingly new, "Bionic Swarm" is an act of instinctive evolution, and some of the most gloriously ripping, sci-fi themed extreme metal you will ever hear.

There is still a firm bedrock of thrash propelling the Dutchmen along, but CRYPTOSIS are an infinitely more imaginative outfit than their previous incarnation. Everything from blistering black metal scree to churning, angular tech-death has been woven into an intricate framework of dissonant but destructive riffing, over which singer/guitarist Laurens Houvast barks, squeals and roars a series of unfathomable, dystopian tales. It's stupidly exciting from the start. After a neatly creepy and disorienting instrumental intro, preview single "Decypher" slams down the CRYPTOSIS ethos with remarkable levels of intensity and precision. The song is a blizzard of jagged riffs and juddering double-kicks, but it's also rich with atmosphere and otherworldly weirdness — this album's futuristic themes brought subtly but unmistakably to life. "Death Technology" repeats the trick; an avalanche of smart ideas and virtuoso precision, it sounds like at least eight of your favorite bands playing simultaneously, but with an internal logic and aesthetic focus that makes the whole thing feel fresh and audacious. "Prospect of Immortality" is even more absorbing, with a greater sense of dynamics and slower tempos, it's an epic, quietly progressive flexing of the compositional muscles.

Elsewhere, "Game of Souls" feels like an inspired, unholy marriage of POSSESSED and CORONER, with Houvast spitting fury like a hardened veteran and a mid-song descent into off-kilter syncopation, replete with a flurry of sublime lead breaks; "Conjuring The Egoist" is a feast of mid-'90s death metal tropes, melodic side-swipes and festering, infernal grandeur; "Mindscape" cranks up the blackened fervor over a marauding, mid-paced assault, laced with ghostly ambience; the closing "Flux Divergence" rattles along at a breathless full pelt for four minutes of caustic, progressive thrash.

Wise men say that there is nothing new under the heavy metal sun at this point, but there is always room for some fiendish and imaginative tinkering with our beloved genre's fundamentals. By forging a new path and following their collective gut, CRYPTOSIS have delivered an electrifying statement of intent and one of the most exciting metal debuts to emerge in a long time. Bionic is about right.