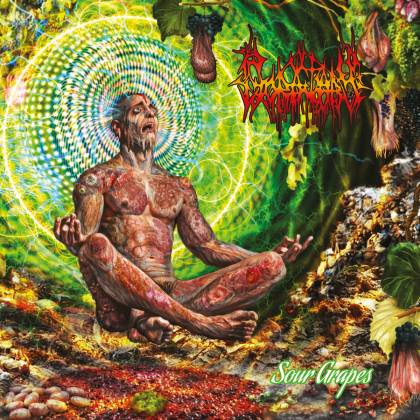 There's a lot to be said for some old-fashioned, wholesome fun. At this point in history, however, I would argue that there's slightly more to be said for screaming "Fuck it!" and listening to GORATORY instead. Always one of the most disgusting bands in death metal, the Boston four piece set the lyrical bar as low as possible, with early bursts of grotesque brutality like "Fisting The Elderly" and "Severed Fuck Stump", all of which could easily detract from the fact that GORATORY are also one of the most dazzling and singular bands operating at the extreme end of the deathly realm. Admittedly, fans have been made to wait: "Sour Grapes" arrives a full 16 years after its immediate predecessor, "Rice On Suede", and a vast amount has happened in the brutal death metal scene during that period. Could these sick fucks possibly have kept up with the times?

The answer to that slightly unnecessary question is a resounding yes. GORATORY are reborn on their fourth album, armed with a distinctly peculiar but potent sound that combines old-school grit and futuristic sheen into a dense and compelling all-out barrage. Guitarist Al Glassman (also JOB FOR A COWBOY) has delivered the goods in no uncertain terms. Bands playing this kind of berserk, brutal tech-metal are not exactly hard to find, but the sheer quality of these riffs and the masterful exactness of the performances make "Sour Grapes" stand out immediately. Lasting an admirably economical 26 minutes, it's the kind of brutish and fat-free explosion of violence that cannot fail to get the blood pumping.

Even ignoring some of the song titles ("I Shit Your Pants" being a personal favorite),"Sour Grapes" is often laugh-out-loud funny, so audacious are these hyper-physical ensemble freak-outs. Opener "Rat King" sets out to confound, with multiple stops, starts and rhythmic tricks, blistering blasts and momentary drops into lobotomized slam grooves: it could easily be a shambles, but instead it's a master class in pinpoint precision and controlled chaos. The lurching "Losing Streak" allows a few more trad metal elements to creep into the blitzkrieg, with juddering, staccato breakdowns and bursts of psychotic thrash thrown in for extra insanity. All chuckling aside, "I Shit Your Pants" is an absolute gem. Bug-eyed and untamed but tinged with black melodrama and a dizzying sense of momentum, it's as vital and visceral as its title is ridiculous. Similarly, a title like "Seth Putnam Was A Sensitive Man" might suggest that GORATORY are just dicking about, like any number of porn-obsessed goregrind idiots, but the song itself is no laughing matter. It's another bewildering display of technicality and verve, and the sound of an absurdly talented bunch of musicians pushing everything to the limit. Welcome back, you disgusting bastards.