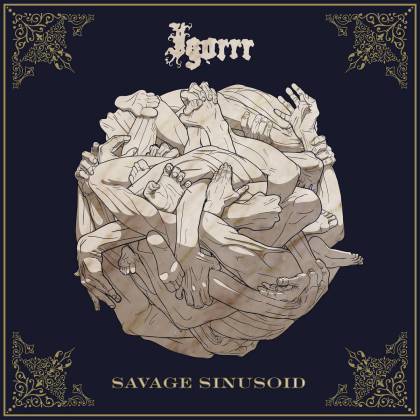 From shadowy internet semi-sensation to his current status as Metal Blade's most determinedly eccentric act, IGORRR's Gautier Serre has played his cards beautifully so far. Steadily progressing from the unmistakably clinical clatter of a studio-bound fever dream to the more sophisticated, semi-organic and musically rich incarnation that emerges on "Spirituality and Distortion", IGORRR are exactly the kind of ferociously niche musical entity that could, in this unpredictable world, score a genuine mainstream breakthrough at some point. Whether it happens with this record or not is debatable, but this is clearly the most cohesive and well-constructed album the French ensemble have nailed, glued and tethered together thus far.

If you're familiar with IGORRR's unique strain of musical madness, then fear not: "Spirituality and Distortion" contains liberal quantities of harpsichords, demented breakbeats, über-gothic funeral marches, Olympic-standard operatic bellowing, and numerous orchestral and cinematic interjections that should make absolutely no sense but, thanks to sheer force of personality and heroic levels of exuberance, actually do. It can be absurdly pretty ("Lost in Introspection") or genuinely unhinged ("Camel Dancefloor"),but it's never dull and always delivered with a shit-eating, mad professor grin. Everything sounds significantly fuller and heavier than 2017's "Savage Sinusoid", and when IGORRR do attempt a more straightforward metal section, boosted conviction is palpable.

At the end of the thrillingly whacked-out "Parpaing", there's a brief burst of white noise, and then silence. Then the accordions start up, accompanied by skull-rattling kick drums, for one of the jauntiest (and therefore, most disturbing) two minutes of music you'll hear in 2020. It's that kind of record. And whether you're old enough to remember how insanely exciting the first MR. BUNGLE album was when it came out, or smart enough to have spent time with the likes of CARNIVAL IN COAL, DOG FASHION DISCO on the art rock side of things or THE ALGORITHM and VENETIAN SNARES on the electronic side, these intricate, fiendishly subversive but remorselessly entertaining eruptions of beautiful music and terrifying noise will keep your brain spinning for a few weeks at least.