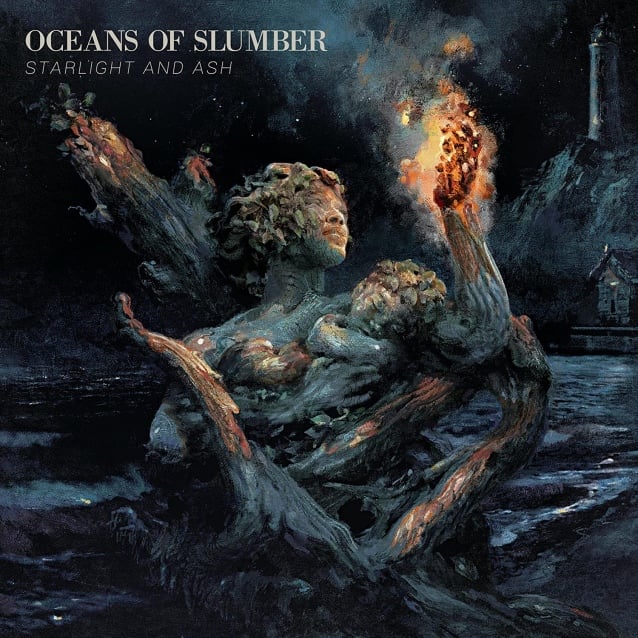 Something special happened on the last, self-titled OCEANS OF SLUMBER album, only two years ago. A deep and daring piece of work that sought to gently redefine the Texans' musical world, it featured plenty of the bombastic extremity that had informed its predecessors but tied in a much stronger sense of songwriting purpose. In particular, "To the Sea (A Tolling of the Bells)" stood out as a bold, tangential and yet beautifully natural step; as vocalist Cammie Gilbert's sonorous, bluesy tones collided with music that owed a superficial debt to gothic metal, but that also seemed to emanate from a much darker, grittier and more truthful place.

Whether or not OCEANS OF SLUMBER arrived at "Starlight and Ash" as a result of one song or another is, of course, pure speculation, but the band's fifth full-length album amounts to a startling and fearless left-hand turn nonetheless. Although still rooted in metal's intrinsic darkness, this is really an album of opaque, contemporary blues, with Gilbert as its bruised but still beating heart.

And holy shit, this is a beautiful record. With songs that cover a broad spectrum of influences and atmospheres, "Starlight and Ash" could easily have been an incoherent mess, but a red line of raw emotion runs through it, from first to last, and every elegant detour honors the whole. Both "The Waters Rising" and "Hearts of Stone" draw from the arcane moodiness of bands like TIAMAT and MY DYING BRIDE, but gone are the overt salutes of earlier albums. Instead, only the essence of those inspirations remains, newly assimilated into OCEANS OF SLUMBER's highly evolved new hybrid of dark new wave textures, dust-bowl Americana and, most importantly, increasingly incisive vocal melodies. The contrast between old and new is even more striking on the likes of "The Lighthouse" and "Red Forest Roads"; both rooted in the blues, they re-imagine the traditional campfire song as existential poetry, aided by the subtlest of modern embellishments.

There are certainly moments of unmistakably metallic heaviness on "Starlight and Ash", but here they act as a contributory features, rather than something more definitive. Freed from the shackles of genre politics, OCEANS OF SLUMBER have played to their greatest strengths, channeling all that grandeur and bombast into something more intimate and authentically crestfallen. Great songs glide by throughout: the ornate but menacing "The Hanging Tree"; the tense, spaghetti western post-rock of "Salvation"; the expansive, dream-doom of "Star Altar". Even a relatively faithful take on that old standard, "House of the Rising Sun" feels fully immersed in OCEANS OF SLUMBER's aesthetic realm and becomes all the more potent and reinvigorated as a result. Again, Gilbert's vocals are nothing short of miraculous, and the sense that this band have undergone some kind of caterpillar-to-butterfly transformation is hard to resist. "Starlight and Ash" concludes with the exquisite dynamic twists and funereal thunder of "The Shipbuilder's Son": the album's most unapologetic bridge to its creators' past and another gorgeously gloomy plunge into thrilling new territory. Never mind the riffs, OCEANS OF SLUMBER have ascended to a higher plane. Praise be.