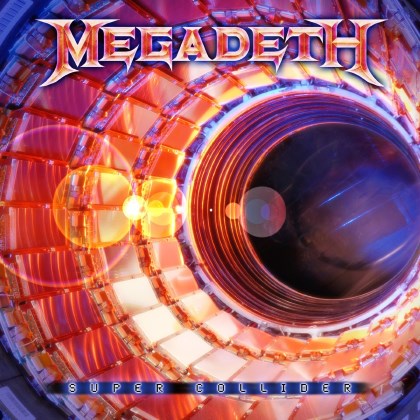 Already the most controversial metal album of year, MEGADETH's 14th hike "Super Collider" evokes two presiding emotions. One, it's nowhere near as bad as the first wave of critics have tomahawked it. However, the offsetting afterthought to "Super Collider" is that Dave Mustaine must live with an unbearable set of demons for him to keep toying with his fans like he does. He has the balls to poke at himself on the mock termination notice signed by Vic Rattlehead on the album's inlay art, but how much of the jibe truly hits home?

For longtime MEGADETH fans, it was tough to wade through the band's mainstream output of the nineties after the speedfreak supremacy of "Killing Is My Business and Business is Good", "Peace Sells But Who's Buying?" and "Rust in Peace". Love them or hate them, "Countdown to Extinction" and "Cryptic Writings" are solid hard rock albums. "Youthanasia" is gangbusters for what it is, at least for the first half. It was 1999's "Risk" that caused alarm amongst the metal faithful until MEGADETH started climbing out of its snare of confusion on "The World Needs a Hero" then rebounding in full with "The System Has Failed". With the blistering fast "Endgame", Dave Mustaine managed to rope back most of his thrash flock. While scaling things back in tempo on 2011's "Th1rt3en", David Ellefson had rejoined the group and there seemed no real cause for panic since it was a heavy album. In fact, most fans considered "Th1rt3en" a primer for Ellefson to heat up his treads and that the subsequent "Super Collider" would be, well, anything but what it is.

It's understandable why so many people are freaked out by the velocity-stripped "Super Collider" after so much potency leading up to this. It does leave to reason whether or not "Endgame" will mark the last time MEGADETH is quantified as a true thrash band. Let's face the facts, though. It's by now evident Dave Mustaine is just as content chasing after the perfect rock record as he is establishing MEGADETH as one of the fastest bands in the land. The lingering question will be from here on out, how many fans will continue to buy his albums down the pike if he doesn't find some sense of consistency?

The opening number "Kingmaker" opens "Super Collider" on the right note. While keeping to a mid-tempo crunch mode, the shredding by Mustaine and Chris Broderick is delicious, much less their manic tradeoff solos. Warning listeners about the perils of painkiller addiction (specifically OxyContin),"Kingmaker" chugs and chugs like a true MEGADETH jam should. Meanwhile, the title track slides out afterwards on the rails of a tasty bass line from David Ellefson and sharp guitar splashes despite the simplistic rock verve of the song. It is this album's answer to "Train of Consequences" from "Youthanasia" with less shred. Mustaine's solo on "Super Collider" is abbreviated but spectacular.

It's the ill-advised third track "Burn!" that presses the anxiety button despite a scorching guitar rip in the opening. Nowhere near as offensive as "Crush 'Em" from "Risk", this deliberate ploy to swing an FM vote is a bit annoying, even if the constantly tinkering guitar work compensates for the generic jock rock feel of the song. Afterwards, "Built for War" tries to re-establish the earlier momentum of the album, but it doesn't quite catch despite the spelunking note sections and suggestion of full-on cataclysm. Shawn Drover should've been allowed to loosen up his tempered trip hammer plods to give the song tightness. Instead, we get to hear a sickly "whoa-ohh" section on the bridge. It's a groaner, alright.

"Off the Edge" might be Dave Mustaine's most personal invitation into his brain canals since "Sweating Bullets" from "Countdown to Extinction", but the former offers little payout. The main melody of "Off the Edge" is hardly as nervous and nervy as it should be, though kudos at least to Mustaine and Broderick for turning out a crisp tag solo.

At last, "Dance in the Rain" begins to pull this album up with a brilliant, maudlin cello intro and a slow-winding sequence of agitation spotlighting another one of Mustaine's capitalist pig tirades. While the song only hits a few tempo spikes towards the end, it's the sweeping guitar strokes in the middle section and Ellefson's sticky bass maneuvers that gives "Dance in the Rain" character. The teases of thrash in the final segment of the song was much-needed, if choppy.

"The Blackest Crow" is one of "Super Collider"'s higher points with a banjo and fiddle-fueled shot of swamp juice along with snazzy snare brush work from Shawn Drover in the opening bars. Turned into a metallic blues ditty with a marching slide and chunky riffs on the verses, "The Blackest Crow" boasts Mustaine's loudest solos on the album while the addictive banjo lines maintains the song's integrity.

"Forget to Remember" takes MEGADETH back to the "Cryptic Writings" era by employing a straightforward rock drive, but yielding a far more appreciable sense of harmony without selling out. Then there's the fantastic "Don't Turn Your Back", which swerves right back into the blues during the opening before the song moves out with one of the album's genuine stabs at swiftness, even at mid-tempo. The omnipresent shredding over the verses and Drover's rhythmic double hammer are worth hanging out for, even if this stuff is still well-stripped of MEGADETH's deadliest extracts.

What saves "Super Collider" from becoming pure rubbish is the skill of its components. Every solo is worth keying in on, David Ellefson has more glue than a first grade art class, and Shawn Drover largely keeps things steady. He's a total rocker on "Kingmaker". This album takes some getting used to, but if you can be in a forgiving mood, "Super Collider" has its merits. There was no need for a cover of THIN LIZZY's "Cold Sweat" other than the excuse to throw in a gnarly guitar solo and to remind metal fans about one of the true greats of hard rock. The good news is that "Super Collider" is not another "Risk". The bad news is MEGADETH fans have no clue what to expect next. Again.